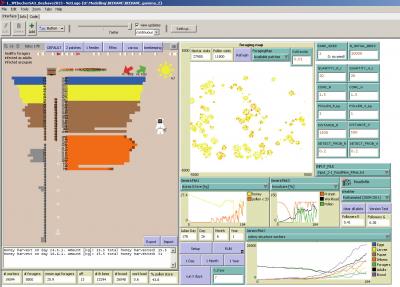 Scientists have created an ingenious computer model that simulates a honey bee colony over the course of several years. The BEEHAVE model, published today in the Journal of Applied Ecology, was created to investigate the losses of honeybee colonies that have been reported in recent years and to identify the best course of action for improving honeybee health.

A team of scientists, led by Professor Juliet Osborne from the Environment and Sustainability Institute, University of Exeter (and previously at Rothamsted Research), developed BEEHAVE, which simulates the life of a colony including the queen’s egg laying, brood care by nurse bees and foragers collecting nectar and pollen in a realistic landscape.

Professor Juliet Osborne said: “It is a real challenge to understand which factors are most important in affecting bee colony growth and survival. This is the first opportunity to simulate the effects of several factors together, such as food availability, mite infestation and disease, over realistic time scales.”

The model allows researchers, beekeepers and anyone interested in bees, to predict colony development and honey production under different environmental conditions and beekeeping practices. To build the simulation, the scientists brought together existing honeybee research and data to develop a new model that integrated processes occurring inside and outside the hive.

The first results of the model show that colonies infested with a common parasitic mite (varroa) can be much more vulnerable to food shortages. Effects within the first year can be subtle and might be missed by beekeepers during routine management. But the model shows that these effects build up over subsequent years leading to eventual failure of the colony, if it was not given an effective varroa treatment.

BEEHAVE can also be used to investigate potential consequences of pesticide applications. For example, the BEEHAVE model can simulate the impact of increased loss of foragers. The results show that colonies may be more resilient to this forager loss than previously thought in the short-term, but effects may accumulate over years, especially when colonies are also limited by food supply.

BEEHAVE simulations show that good food sources close to the hive will make a real difference to the colony and that lack of forage over extended periods leaves them vulnerable to other environmental factors. Addressing forage availability is critical to maintaining healthy hives and colonies over the long term.

Professor Osborne added: “The use of this model by a variety of stakeholders could stimulate the development of new approaches to bee management, pesticide risk assessment and landscape management. The advantage is that each of these factors can be tested in a virtual environment in different combinations, before testing in the field. Whilst BEEHAVE is mathematically very complex, it has a user-friendly interface and a fully accessible manual so it can be explored and used by a large variety of interested people”.

BEEHAVE is freely available at http://www.beehave-model.net.

The project was funded by an Industrial Partnership Award from BBSRC with co-funding from Syngenta. It involved collaboration between ecologists and modellers from Exeter (Professor Osborne, Dr Becher and Dr Kennedy, who started the project at Rothamsted Research), Helmholtz Centre for Environmental Research – UFZ Leipzig (Professor Grimm and Ms Horn) and Syngenta (Dr P Thorbek).

Professor Osborne’s research group studies the behaviour and ecology of bees and other pollinators. They started the project when based at Rothamsted Research and moved to the University of Exeter in 2012. They work with beekeepers, conservation organisations, farmers and industry with the aim of conserving bee populations, and protecting and promoting wild flower and crop pollination.

Professor Melanie Welham, BBSRC’s Science Director, said: “Healthy bees are vital to our food supply as they pollinate many important crops. This virtual hive is an important new research tool to help us understand how changes to the environment impact on bee health.”

Dr Pernille Thorbek (Syngenta) adds: “Studying several stressors in multifactorial field trials is immensely complicated and difficult to do. BEEHAVE is an important new tool which can simulate and explore interactions between stressors and can improve understanding and focus experimental work.”

“BEEHAVE can help explore which changes to agricultural landscapes and beekeeping practices will benefit honeybees the most.”

Dr David Aston, President of the British Beekeepers Association, commented that: “This model will be an important tool in helping us to understand the interactions and impact of the diverse stressors to which honey bee colonies can be exposed.

“Not only will it be invaluable for scientific research purposes but it will also be an important training tool to help beekeepers better understand the impacts of their husbandry and other factors on the health and survival of their colonies.