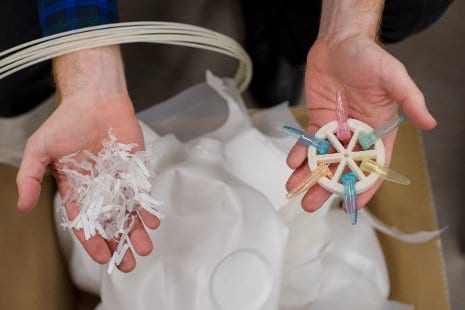 Making your own stuff with a 3D printer is vastly cheaper than what you’d pay for manufactured goods, even factoring in the cost of buying the plastic filament.

Yet, you can drive the cost down even more by making your own filament from old milk jugs. And, while you are patting yourself on the back for saving 99 cents on the dollar, there’s a bonus: you can feel warm and fuzzy about preserving the environment.

Pearce’s team did a life-cycle analysis on a run-of-the-mill milk jug made from HDPE plastic. After cleaning it and cutting it in pieces, they ran it through an office shredder and a RecycleBot, which turns waste plastic into 3D printer filament.

Compared to an ideal urban recycling program, which collects and processes plastic locally, turning milk jugs into filament at home uses about 3 percent less energy. “Where it really shows substantial savings is in smaller towns like Houghton, where you have to transport the plastic to be collected, then again to be recycled, and a third time to be made into products,” said Pearce, an associate professor of materials science and engineering/electrical and computer engineering. Then the energy savings skyrocket to 70-80 percent. And, recycling your own milk jugs uses 90 percent less energy than making virgin plastic from petroleum.

Pearce also compared the cost of making your own filament with buying it.

“Filament is retailing for between $36 and $50 a kilogram, and you can produce your own filament for 10 cents a kilogram if you use recycled plastic,” he said. “There’s a clear incentive, even if you factor in the cost of buying the RecycleBot.”

HDPE plastic isn’t ideal. “It shrinks slightly as it cools, so you have to take that into account,” said Pearce. “But if you are making something like a statue or a pencil holder, it doesn’t matter.”

This new recycling technology has caught the eye of the Ethical Filament Foundation, which aims to improve the lives of waste pickers, who scour other people’s trash for items to sell or recycle. “In the developing world, it’s hard to get filament, and if these recyclers could make it and sell it for, say, $15 a kilogram, they’d make enough money to pull themselves out of poverty while doing the world a lot of good,” he said.

The study, “Life-Cycle Analysis of Distributed Recycling of Post-consumer High Density Polyethylene for 3-D Printing Filament,” by Megan Kreiger, Meredith Mulder, Alexandra Glover and Pearce, all of Michigan Tech, was published Feb. 12 in the Journal of Cleaner Production. An open access version is available from Academia.edu.