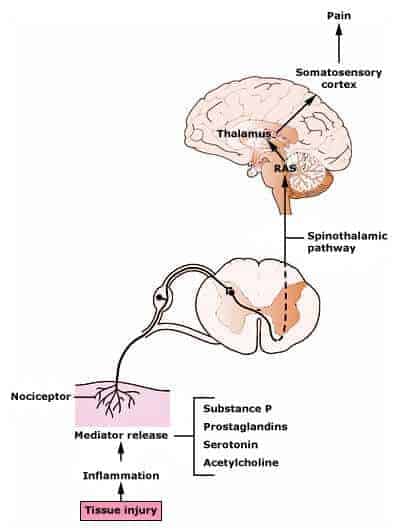 Researchers at the School of Medicine have identified a subset of nerve cells that mediates a form of chronic, touch-evoked pain called tactile allodynia, a condition that is resistant to conventional pain medication.

The discovery, described in a Stanford press release, could point researchers to more fruitful efforts to develop effective drugs for the condition.

Touch-evoked pain occurs as part of a larger neuropathic pain condition arising from damage or disruption of nerve-cell circuits or signals caused by disorders such as alcoholism, diabetes, shingles and AIDS, or procedures such as spine surgery and chemotherapy. For patients with tactile allodynia, the slightest touch — a gentle caress or the brush of shirt against skin — can cause excruciating pain because changes in nerve-cell signals or networks trick the brain into mistaking touch for pain.

The study, published online Feb. 27 in Neuron, found that these “touch” neurons are different from the usual “pain” neurons that respond to stimuli such as cuts or bruises.

Unlike pain caused by such wounds, neuropathic pain is difficult to manage because little can be done to repair nerve damage. Managing it may require strong painkillers or combinations of treatments.

Common painkillers such as morphine have little effect on touch-evoked pain, possibly because they don’t target the touch neurons, the authors say. Morphine binds to specific protein-binding sites on pain neurons called mu opioid receptors, or MORs, and cuts off the their signals so that the brain can no longer sense pain.

However, the touch neurons do not carry MORs, which is why morphine cannot bind to them and block the pain. Instead, they carry delta opioid receptors, or DORs, whose role in pain control has been unclear until recently.

“That’s been the problem so far; any type of severe pain you have, you go into the clinic and very likely you will be treated with morphine-like opioids,” said Gregory Scherrer, PharmD, PhD, the senior author of the study and an assistant professor of anesthesia. “You can give some of these patients as much morphine as you want; it won’t work if the mu opioid receptor is not present on the neurons that underlie that type of pain.”

There are currently no Food and Drug Administration-approved pain-control drugs that target DORs. Previous attempts at developing DOR-targeting drugs haven’t succeeded because researchers didn’t know what type of pain such drugs would be useful for, Scherrer said.

Two DOR-binding drugs developed for knee pain by Adolor Corp., a biotechnology firm, for instance, probably failed because there is no compelling evidence that DOR was present or involved. AstraZeneca, another pharmaceutical firm, also had a DOR program but recently stopped its research efforts, Scherrer added.

“Now that we have provided a rationale and mechanism supporting the utility of DOR agonists for cutaneous pain and tactile allodynia, these companies will be able to design trials more carefully to evaluate specifically the drugs’ efficacy against touch-evoked pain,” he said.

Earlier studies by Scherrer and others hinted at the presence of special nerve fibers on the skin that might contribute to touch-evoked pain.

In the current study, Scherrer and colleagues used fluorescent mouse models to isolate these neurons and identify how they control touch-evoked pain. They found that DOR can play an inhibitory role in these neurons: When proteins bind to DOR, they cut off communication to the spinal cord, through which sensory signals travel to the brain.
DOR-carrying “touch” neurons pervade the skin and could easily be targeted by drugs in the form of skin patches or topical creams, Scherrer suggested.

“By contrast, most MOR-carrying neurons penetrate internal organs,” he said. “That’s why morphine is effective in treating post-surgery pain, for example.”

Scherrer and fellow researchers tested two different DOR-binding compounds individually on mice and found that both reduced the mice’s sensitivity to touch-evoked pain.

Preliminary studies also indicate that DOR-targeting drugs might not cause dramatic side effects like morphine does, especially if they can be used topically, Scherrer said.

“Morphine and other MOR-targeting drugs have myriad deleterious side effects — including addiction, respiratory depression, constipation, nausea and vomiting — that further limits their utility for chronic pain management,” he said.

The next step is to determine whether DOR could be a target for other types of pain, such as arthritis pain, pain from bone cancer and muscle pain, Scherrer added.

The findings also suggest that the body’s opioid system — normally associated with pain and addiction — may also respond to other stimuli such as touch.

“We may have underestimated the importance of the opioid system and what can be achieved with drugs targeting other subtypes of opioid receptors,” Scherrer said.

The study was funded by the National Institutes of Health and carried out in collaboration with researchers at several other institutes.

The Department of Anesthesia, the Stanford Institute for Neuro-Innovation and Translational Neurosciences, and the Department of Molecular and Cellular Physiology also supported the work.