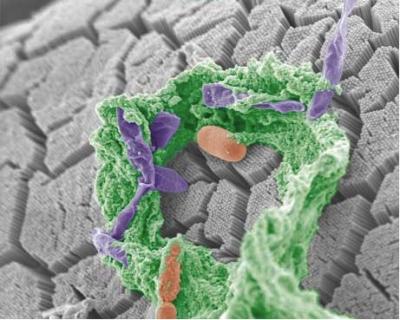 The interactions of the gut microbiota in children with typical diabetes autoantibodies differ from that in healthy children.

The fact that these differences already exist before antibodies are detectable in the blood adds to the growing evidence that microbial DNA, the so-called microbiome, may be involved in the development of autoimmune processes. Scientists from the Helmholtz Zentrum München have published their findings in the specialist journal Diabetes.

In the course of the study, the team headed by PD Dr. Peter Achenbach and Professor Anette-Gabriele Ziegler from the Institute of Diabetes Research as well as Dr. David Endesfelder and Dr. Wolfgang zu Castell from the Scientific Computing Research Unit at the Helmholtz Zentrum München, ascertained that the diversity and number of bacteria present in the gut were similar in both collectives. However, bacterial interaction networks in the gut varied significantly in the two groups – even in the first years of life, months or years before one group developed the typical diabetes autoantibodies.

Colonies of bacteria form what is known as the microbiome, and the genetic information contained within it influences the host organism. For some time, the microbiome has been associated with different diseases; the gut microbiome, in particular, is thought to play a role in the pathogenesis of metabolic diseases such as diabetes. The scientists’ findings show that not only the microbial composition but also the way in which it interacts in functional communities could affect the body’s immune system.

How is the microbiome influenced?

“A range of external factors such as diet, hygiene or even the birth delivery mode can influence both the composition of gut bacteria and the way in which the bacteria interact,” explains Professor Ziegler, who heads the study. “If we are able to identify those parameters that tend to indicate more negative microbiome characteristics, we can develop new approaches to preventing autoimmune processes – for example, in type 1 diabetes.“

You can read more about research on type 1 diabetes at the Helmholtz Zentrum München here: