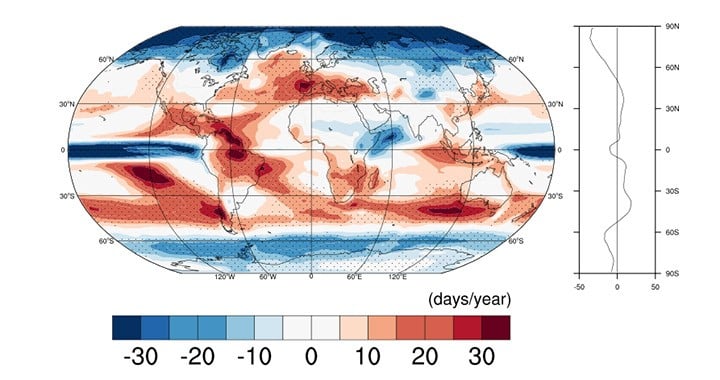 By the end of the 21st century, some parts of the world can expect as many as 30 more days a year without precipitation, according to a new study by Scripps Institution of Oceanography, UC San Diego researchers.

Ongoing climate change caused by human influences will alter the nature of how rain and snow falls; areas that are prone to dry conditions will receive their precipitation in narrower windows of time. Computer model projections of future conditions analyzed by the Scripps team indicate that regions such as the Amazon, Central America, Indonesia, and all Mediterranean climate regions around the world will likely see the greatest increase in the number of “dry days” per year, going without rain for as many as 30 days more every year. California, with its Mediterranean climate, is likely to have five to ten more dry days per year.

This analysis advances a trend in climate science to understand climate change on the level of daily weather and on finer geographic scales.

“Changes in intensity of precipitation events and duration of intervals between those events will have direct effects on vegetation and soil moisture,” said Stephen Jackson, director of the U.S. Department of the Interior Southwest Climate Science Center, which co-funded the study. “(Study lead author Suraj) Polade and colleagues provide analyses that will be of considerable value to natural resource managers in climate adaptation and planning. Their study represents an important milestone in improving ecological and hydrological forecasting under climate change.”

Polade, a postdoctoral researcher at Scripps, said that one of the implications of this finding is that annual rainfall could become less reliable in drying regions as annual averages will be calculated over a smaller number of days. The 28 models used by the team showed agreement in many parts of the world on the change in the number of dry days those regions will receive. They were in less agreement about how intense rain or snow will be when it does fall, although there is general consensus among models that the most extreme precipitation will become more frequent. Climate models agreed even less on how the conflicting daily changes affect annual mean rainfall.

“Looking at changes in the number of dry days per year is a new way of understanding how climate change will affect us that goes beyond just annual or seasonal mean precipitation changes, and allows us to better adapt to and mitigate the impacts of local hydrological changes,” said Polade, a postdoctoral researcher who works with Scripps climate scientists Dan Cayan, David Pierce, Alexander Gershunov, and Michael Dettinger, who are co-authors of the study.

In regions like the American Southwest, where precipitation is historically infrequent and where a couple of storms more or fewer can make a wet or a dry year, annual water accumulation varies greatly. A decrease in precipitation frequency translates into even more year-to-year variability in fresh water resources for the Southwest.

“These profound and clearly projected changes make physical and statistical sense, but they are invisible when looking at long-term trends in average climate projections,” Gershunov said.

Other regions of the world, most of which are climatologically wet, are projected to receive more frequent precipitation. Most such regions are not on land or are largely uninhabited, the equatorial Pacific Ocean and the Arctic prominent among them.

The authors suggest that follow-up studies should emphasize more fine-scale analyses of dry day occurrences and work towards understanding the myriad regional factors that influence precipitation.

“Climate models have improved greatly in the last 10 years, which allows us to look in detail at the simulation of daily weather rather than just monthly averages,” said Pierce.