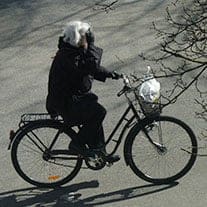 People who have suffered a stroke often experience severe fatigue. But doctors find it hard to help these patients as their experiences of fatigue may not necessarily be caused by physiological problems. New research from University of Copenhagen suggests that dreams of returning to everyday life as it was before the stroke may contribute to the patients’ experiences of fatigue and that it may be a help to establish new routines instead of trying to regain old ones.

“Having a stroke can be a devastating experience, and those affected by one often feel that their lives are turned upside down. For many patients, life after a stroke is therefore about reestablishing life as it was before the stroke. But this is very rarely possible and thus a source of frustration for stroke patients,” says ethnologist Michael Andersen from University of Copenhagen who has interviewed a number of patients experiencing severe fatigue after a stroke.

Michael Andersen’s PhD thesis was carried out in collaboration with a Danish hospital, where doctors found it hard to find a correlation between the size or the impact of the stroke and the individual experiences of fatigue. Michael Andersen located other potential reasons for the fatigue than the patients’ brains – their everyday lives.

Fatigue linked to objects or actions

When interviewing the patients Michael Andersen noticed that they no longer related their fatigue to the same objects or actions as they did pre-stroke.

“In our everyday lives we link fatigue with specific objects or actions which we hardly even notice; it can be a bed or making a cup of tea in the evening. After a stroke, many patients feel constantly fatigued without being able to locate it,” Michael Andersen explains.

According to Michael Andersen, locating fatigue in other objects and actions than before can be a successful approach when trying to restore an everyday life – not the same as before, but a completely new one.

“I interviewed a woman who felt extremely fatigued after her stroke. She noticed that if she locked her bicycle when she came home from shopping, she would fall asleep on the couch and not get out the door again that day. So the specific action of locking her bicycle became a signal of fatigue. She then realised that if she did not lock her bicycle, she would be able to do more. She thus had a way of coping with her fatigue,” Michael Andersen says.

Michael Andersen suggests that stroke patients might learn to cope with their fatigue if they – in collaboration with their own doctor – learned to think of fatigue in relation to specific objects or actions. This could frame the patients’ fatigue so it does not become a phenomenon defining their lives

The thesis is part of the cross-disciplinary research project Centre for Healthy Aging, which is funded by Nordea-fonden.