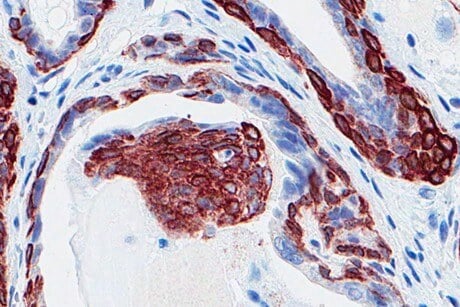 Northwestern Medicine scientists have demonstrated that cancer cells – and not normal cells – can be killed by eliminating either the FAS receptor, also known as CD95, or its binding component, CD95 ligand.

“The discovery seems counterintuitive because CD95 has previously been defined as a tumor suppressor,” said lead investigator Marcus Peter, professor in medicine-hematology/Oncology at Northwestern University Feinberg School of Medicine. “But when we removed it from cancer cells, rather than proliferate, they died.”

The findings were published March 20 in Cell Reports.

The self-destruction of cells, known as apoptosis, is a necessary process that helps the body rid itself of unwanted and potentially harmful cells. Under normal circumstances, when CD95 is activated, the process of apoptosis is triggered. Seen as a keeper of homeostasis in the immune system, it’s been long-considered vital for the prevention of uncontrolled, cancerous cell growth.

“In order to conduct this line of work, we had to create something that I don’t believe exists, a cancer cell completely devoid of CD95,” said Peter, a member of the Robert H. Lurie Comprehensive Cancer Center of Northwestern University. “If CD95 was truly a tumor suppressor, its elimination would result in an enhanced growth and/or invasiveness of cancer cells.”

Peter and his team tested cancer cells from nine different tissue origins. Instead of proliferating, the cells increased their size and the production of harmful reactive oxygen species, resulting in DNA damage. In their first attempt to divide, they died.

Peter determined that the “cell death induced by CD95 receptor or ligand elimination (DICE),” comprises multiple death pathways. A cancer cell would have to mutate components of each to defend against DICE, a highly unlikely scenario.

“DICE killed every cancer cell we put it up against and we found nothing that could prevent its destruction,” Peter said. “The fact that none of the more than 1,000 drugs, nor the knockdown of any single gene was found to counteract DICE, makes it a very promising new way to kill cancer cells.”

To confirm the importance of CD95 for the survival of cancer cells in vivo, Peter and colleagues removed it from tissues in animal models and found that cancer could not form.

“We know CD95 is not essential for the survival of any tissue outside of the immune system because mice with a deletion of either CD95 or CD95 ligand complete an average lifecycle with no illness other than autoimmunity,” he said.

The findings suggest that dependence on CD95 and CD95 ligand for survival is a feature of cancer cells that distinguishes them from normal cells.

“We didn’t believe these findings at first, but after more than four years of detailed experiments, we have convinced ourselves and others that what we have shown reflects reality,” Peter said.

Peter is now working with Chad Mirkin, the George B. Rathmann Professor of Chemistry in the Weinberg College of Arts and Sciences and professor of medicine at Feinberg, to induce DICE in cancer cells using small interfering RNAs delivered by gold nanoparticles.

“We’re not going to reinvent the wheel,” Peter said. “Alexander Stegh, assistant professor of neurology and of medicine at Feinberg, has already used the same nano-platform to target a gene in a mouse model for brain cancer. In developing nano-DICE, we can begin the process of finding new treatment options.”