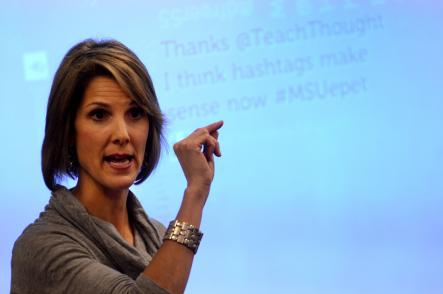 University scholars are largely resisting the use of social media to circulate their scientific findings and engage their tech-savvy students, a Michigan State University researcher argues in a new paper.

While social media is widely used in fields such as journalism and business – not just to push a product but also to engage in open dialogue with readers and clients – it has failed to take hold in academia’s so-called ivory tower. This is troubling given that universities in the United States and Europe are trying to increase access to publicly funded research, said Christine Greenhow, assistant professor in MSU’s College of Education.

“Only a minority of university researchers are using free and widely available social media to get their results and published insights out and into the hands of the public, even though the mission of public universities is to create knowledge that makes a difference in people’s lives,” Greenhow said.

“Simply put, there’s not much tweeting from the ivory tower.”

While there is some evidence that faculty members are starting to share their work through social media, it’s unlikely to become widespread unless universities adopt policies for promotion and tenure that reward these practices, Greenhow said.

In a survey of 1,600 researchers, Greenhow found that only 15 percent use Twitter, 28 percent use YouTube and 39 percent use Facebook for professional purposes. Those who do mainly use social media to find collaborators and disseminate their work and the work of others; they do not use it largely in their teaching of students.

“Academia is not serving as a model of social media use or preparing future faculty to do this,” Greenhow said.

The issue, she added, is at the heart of larger discussions regarding accessibility, equal rights to higher education, transparency and accountability.

The paper, “Social scholarship: Reconsidering scholarly practices in the age of social media,” appears online in the British Journal of Educational Technology. It was co-authored by Benjamin Gleason, MSU doctoral student of education.