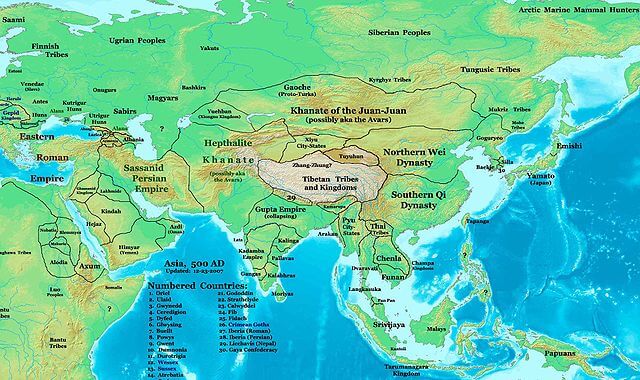 Although many studies have associated the demise of complex societies with deteriorating climate, few have investigated the connection between an ameliorating environment, surplus resources, energy and the rise of empires.

The 13th-century Mongol Empire was the largest contiguous land empire in world history. According to a new study co-authored by Nicola Di Cosmo, 2014 Robert C. Staley Distinguished Visiting Professor in East Asian Studies, and published in the Proceedings of the National Academy of Sciences, the rise of the empire can be directly attributed to a favorable climate change characterized by 15 consecutive years of above-average moisture in central Mongolia. These climate conditions promoted high grassland productivity and favored the formation of Mongol political and military power by providing ideal conditions for raising horses, which served as the backbone of Mongol military might.

Nicola Di Cosmo is the Luce Foundation Professor in the School of Historical Studies at the Institute for Advanced Study in Princeton, N.J. He is currently focusing on climate change questions at the time of the Mongol empire, political thought of the early Manchus and commercial relations in northeast Asia on the eve of the Qing Conquest. His research is on the history of relations between China and Inner Asia from prehistory to the modern period. He is the author of “Ancient China and Its Enemies: The Rise of Nomadic Powers in East Asian History” (2002) and “Manchu-Mongol Relations on the Eve of the Qing Conquest” (2003), and the editor of “Military Culture in Imperial China” (2009) and “The Cambridge History of Inner Asia” (2009). He received his doctorate from Indiana University. Prior to joining the institute in 2003, he held research and teaching positions at the University of Cambridge, Harvard University and the University of Canterbury in New Zealand.