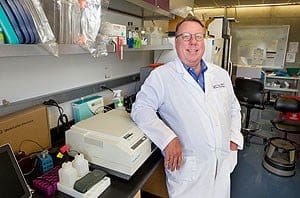 As many as 10 percent of women with a personal or family history of breast or ovarian cancer have at least one genetic mutation that, if known, would prompt their doctors to recommend changes in their care, according to a new study by researchers at the Stanford University School of Medicine.

The study was conducted using what’s known as a multiple-gene panel to quickly and cheaply sequence just a few possible genetic culprits selected by researchers based on what is known about a disease. Although such panels are becoming widely clinically available, it’s not been clear whether their use can help patients or affect medical recommendations.

“Although whole-genome sequencing can clearly be useful under the right conditions, it may be premature to consider doing on everyone,” said James Ford, MD, who directs Stanford’s Clinical Cancer Genetics Program. “Gene panels offer a middle ground between sequencing just a single gene like BRCA1 that we are certain is involved in disease risk, and sequencing every gene in the genome. It’s a focused approach that should allow us to capture the most relevant information.”

Ford was a co-author of a recent paper in The Journal of the American Medical Association that highlighted the challenges and opportunities of making whole-genome sequencing clinically available for seemingly healthy people. Although that study showed that whole-genome sequencing can be potentially life-saving, the challenges involved in sequencing the billions of nucleotides that make up all of a person’s DNA, and then translating the results into clinical care recommendations, is significant.

“This study indicates that using gene panels to screen for potentially harmful variants can be clinically useful in certain groups of patients,” said  Kurian. “It also shows that patients, some of whom had given blood samples for research as many as 10 years earlier, are willing and interested to receive this type of follow-up information and to incorporate it into their health care plans.”

Gene panels allow researchers to learn the sequences of several genes simultaneously from a single blood sample. It stands to reason that screening for mutations in just a few select genes is quicker, easier and cheaper than whole-genome sequencing. The technique usually focuses on fewer than 100 of the approximately 21,000 human genes. But until now, few studies have investigated whether homing in on a pre-determined panel of suspects can actually help people.

In the study, Kurian and Ford assessed the sequences of 42 genes known to be associated with the development of breast or other cancers, or involved in DNA repair pathways that nip potentially dangerous mutations in the bud. Blood samples in the study came from 198 women who underwent BRCA1 and BRCA2 testing at the Stanford Clinical Cancer Genetics Program between 2002 and 2012. At the time of the testing, the women were asked if they would like to donate an additional blood sample for future research.

Of the 198 women, 57 carried BRCA1/2 mutations. Ford and Kurian found that 14 of the 141 women without a BRCA1/2 mutation had clinically actionable mutations in one of the 42 genes assessed by the panel. (An actionable mutation is a genetic variation correlated strongly enough to an increase in risk that clinicians would recommend a change in routine care — such as increased screening — for carriers.)

Eleven of the 14 women were reachable by telephone, and 10 accepted a follow-up appointment with a genetic counselor and an oncologist to discuss the new findings. The family members of one woman, who had died since giving her blood sample, also accepted counseling. Six participants were advised to schedule annual breast MRIs, and six were advised to have regular screens for gastrointestinal cancers; many patients received more than one new recommendation.

One woman, with a history of both breast and endometrial cancer, learned she had a mutation that causes Lynch syndrome, a condition that increases the risk of many types of cancers. As a result, she had her ovaries removed and underwent a colonoscopy, which identified an early precancerous polyp for removal.

“An important question about the use of these gene panels is whether they can allow us to provide additional genetic guidance and screening,” Kurian said. “We found that the participants were interested and willing to receive the additional information, and they were generally pleased at the results, which helped them make decisions about their clinical care.”

“This problem is shared with whole-genome sequencing,” Ford said, “and should subside as we gather ever more data on the effect of specific mutations in these genes.” The National Institutes of Health-sponsored Clinical Genome Resource, or ClinGen, was created to speed the identification and aid in the interpretation of clinically important variants.

Yet even though the study shows that gene panels can be useful in some groups, it may be some time before they could be routinely used in the general population, the researchers said.

“It’s a slippery slope at the moment,” Ford said. “We need to know how prevalent these cancer-associated mutations are in the general population. We also need to be aware that, at least for a while, it’s very likely that every person will harbor one or more variants of uncertain significance. Is that information that a person would want to know? Is it helpful? In 10 years, this is likely to change as we learn more about the clinical significance of these changes.”