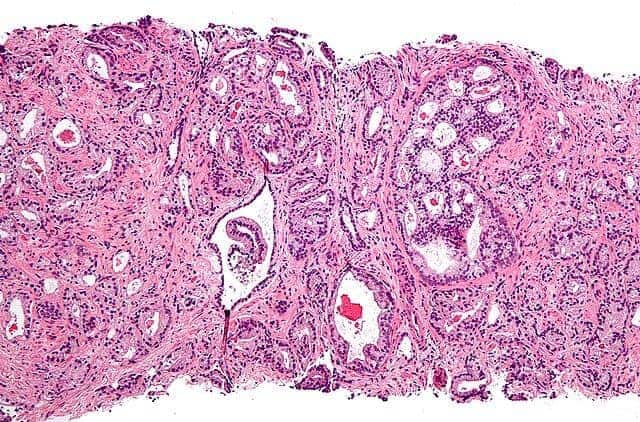 Men who show signs of chronic inflammation in non-cancerous prostate tissue may have nearly twice the risk of actually having prostate cancer than those with no inflammation, according to results of a new study led by researchers from the Johns Hopkins Kimmel Cancer Center.

The link between persistent inflammation and cancer was even stronger for men with so-called high-grade prostate cancer — those with a Gleason score between 7 and 10 — indicating the presence of the most aggressive and rapidly growing prostate cancers.

“What we’ve shown in this observational study is a clear association between prostate inflammation and prostate cancer, although we can’t prove that inflammation is a cause of prostate cancer,” said Elizabeth A. Platz, Sc.D., M.P.H., a professor in the Department of Epidemiology at the Johns Hopkins University Bloomberg School of Public Health and the School of Medicine.

Cancer researcher Angelo M. De Marzo, M.D., Ph.D., cautioned that inflammation is too widespread in men to be used as a diagnostic tool for prostate cancer. However, researchers want to know more about what causes prostate inflammation, how it may contribute to prostate cancer, and whether this inflammation may be prevented. “I think there will be strategies going forward for either preventing inflammation or intervening when it occurs,” Platz said.

The findings, reported April 18 in Cancer Epidemiology, Biomarkers & Prevention, come from analysis of information about men in the placebo-taking group of the Southwest Oncology Group’s Prostate Cancer Prevention Trial. That trial, designed to learn whether the drug finasteride could prevent prostate cancer, included biopsies for prostate cancer at the end of the study even if there were no suspicious signs of cancer such as high prostate specific antigen (PSA) levels.

Researchers have examined possible links between inflammation and prostate cancer in other studies, but the previous studies began by sampling tissue from men who had some cause to undergo a biopsy, Platz explained. “Our study was designed to rule out the bias that would ordinarily exist between the way we detect prostate cancer and the presence of inflammation.”

For the study, Platz, De Marzo and colleagues examined benign tissue samples taken from the biopsies of 191 men with prostate cancer and 209 men without cancer, examining the samples for the prevalence and extent of immune cells that indicate inflammation. They found that 86.2 percent of the prostate cancer patients had at least one tissue sample with signs of inflammation, compared to 78.2 percent of men without cancer.

“We knew going into this research that inflammation in the prostate is very common in men who have biopsies because of the higher PSA levels and other indicators of prostate cancer,” said De Marzo, who is a professor of pathology at Johns Hopkins’ School of Medicine and associate director of cancer research pathology at its Kimmel Cancer Center, “but we did not anticipate the high prevalence of prostate inflammation in men who didn’t have an indication for biopsy.”

The Johns Hopkins team is studying the relationship between PSA levels and detailed measures of inflammation in men with no indications for a prostate biopsy, as well as a potential link between sexually transmitted disease history and the amount of inflammation in the prostate.