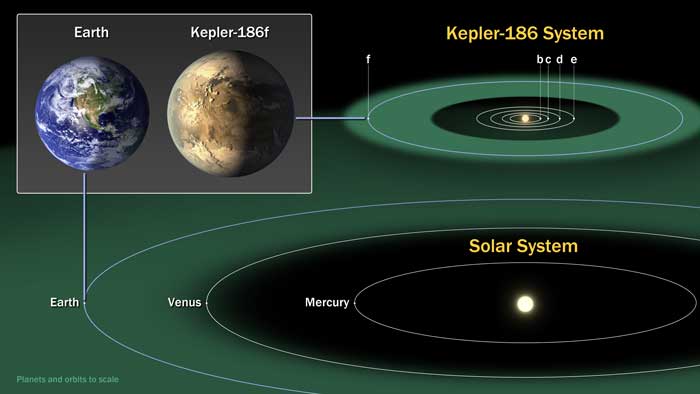 A team of astronomers that includes Penn State scientists has discovered the first Earth-size planet orbiting a star in the “habitable zone” — the distance from a star where liquid water might pool on the surface of an orbiting planet. The discovery was made with NASA’s Kepler Space Telescope. The discovery of this Earth-size planet, now named Kepler-186f, confirms — for the first time — that planets the size of Earth exist in the habitable zone of stars other than our Sun.

Some planets previously had been found in the habitable zone, but they all were at least 40 percent larger in size than Earth. “Kepler-186f may be the most similar planet to the Earth yet discovered,” said Penn State Professor of Astronomy and Astrophysics Eric Ford, a coauthor of the paper. “Kepler-186f has a radius just that is just 10 percent larger than that of the Earth and it is located comfortably in the ‘habitable zone,’ meaning that it’s temperature could allow for liquid water to exist on it’s surface.”

Ford also said there are some things that the discovery team already knows are different about the planet Kepler-186f as compared to planet Earth. “Kepler-186f orbits a star that is roughly half the mass of the Sun. That means its star is much cooler than our Sun and that it emits most of its light in infrared radiation, rather than as visible light like our Sun provides. Even if the physical properties of Kepler-186f were exactly the same as those of the Earth, we do not yet know whether life could take root on such a planet and how it might differ from life on Earth.”

The discovery team’s research paper, which will be published by the journal Science on 17 April 2014, also reveals that Kepler-186f orbits its star once every 130-days and receives one-third the energy from its star that Earth gets from the Sun. On the surface of Kepler-186f, the brightness of its star at high noon is only as bright as our Sun appears to us about an hour before sunset. The four companion planets, Kepler-186b, Kepler-186c, Kepler-186d, and Kepler-186e, whiz around their star every four, seven, 13, and 22 days, respectively, making them too hot for life as we know it. These four inner planets all measure less than 1.5 times the size of Earth.

“The discovery of Kepler-186f is a significant step in finding worlds like our planet Earth,” said John Grunsfeld, associate administrator of NASA’s Science Mission Directorate at the agency’s headquarters in Washington. The Kepler Space Telescope, which simultaneously and continuously measured the brightness of more than 150,000 stars, is NASA’s first mission capable of detecting Earth-size planets around stars like our Sun.

Grunsfeld said “Future NASA missions like the James Webb Space Telescope and the Transiting Exoplanet Survey Satellite are poised to determine the composition and atmospheric conditions of distant worlds, continuing humankind’s quest to find truly Earth-like worlds.” Elisa Quintana, research scientist at the SETI Institute at NASA’s Ames Research Center in California and lead author of the paper in the journal Science, said this finding of a habitable-zone planet comparable to Earth in size is “a major step forward. We know of just one planet where life exists — Earth. When we search for life outside our solar system we focus on finding planets with characteristics that mimic those of Earth.”

While this discovery is exciting, Ford said it is only the tip of the iceberg of exciting discoveries to come. “In the coming years, we will continue to discover planets increasingly similar to our Earth. We will find small planets around stars that are brighter and closer to Earth, making them easier to study in more detail. We will measure their masses and densities, so as to understand their composition using next-generation observatories like the Habitable Zone Planet Finder and MINERVA observatories that are being developed by the Center for Exoplanets and Habitable Worlds at Penn State.”