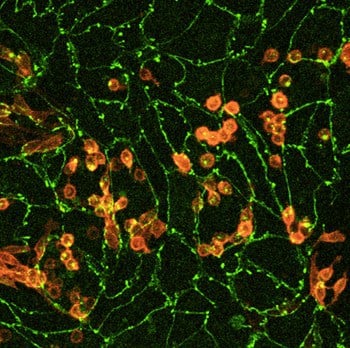 The ability to reliably and safely make in the laboratory all of the different types of cells in human blood is one key step closer to reality.

Writing today (July 14, 2014) in the journal Nature Communications, a group led by University of Wisconsin-Madison stem cell researcher Igor Slukvin reports the discovery of two genetic programs responsible for taking blank-slate stem cells and turning them into both red and the array of white cells that make up human blood.

The research is important because it identifies how nature itself makes blood products at the earliest stages of development. The discovery gives scientists the tools to make the cells themselves, investigate how blood cells develop and produce clinically relevant blood products.

“This is the first demonstration of the production of different kinds of cells from human pluripotent stem cells using transcription factors,” explains Slukvin, referencing the proteins that bind to DNA and control the flow of genetic information, which ultimately determines the developmental fate of undifferentiated stem cells.

During development, blood cells emerge in the aorta, a major blood vessel in the embryo. There, blood cells, including hematopoietic stem cells, are generated by budding from a unique population of what scientists call hemogenic endothelial cells. The new report identifies two distinct groups of transcription factors that can directly convert human stem cells into the hemogenic endothelial cells, which subsequently develop into various types of blood cells.

“By overexpressing just two transcription factors, we can, in the laboratory dish, reproduce the sequence of events we see in the embryo” where blood is made, says Slukvin of the Department of Pathology and Laboratory Medicine in the UW School of Medicine and Public Health and the Wisconsin National Primate Research Center.

The method developed by Slukvin’s group was shown to produce blood cells in abundance. For every million stem cells, the researchers were able to produce 30 million blood cells.

A critical aspect of the work is the use of modified messenger RNA to direct stem cells toward particular developmental fates. The new approach makes it possible to induce cells without introducing any genetic artifacts. By co-opting nature’s method of making cells and avoiding all potential genetic artifacts, cells for therapy can be made safer.

“You can do it without a virus, and genome integrity is not affected,” Slukvin notes.

Moreover, while the new work shows that blood can be made by manipulating genetic mechanisms, the approach is likely to be true as well for making other types of cells with therapeutic potential, including cells of the pancreas and heart.

“We still don’t know how to do that,” Slukvin notes, “but our new approach to making blood cells will give us an opportunity to model their development in a dish and identify novel hematopoietic stem cell factors.”

The study was conducted under the umbrella of the Progenitor Cell Biology Consortium, run by National Heart, Lung and Blood Institute, part of the National Institutes of Health, and involved a collaboration of scientists at UW-Madison, the Morgridge Institute for Research, the University of Minnesota at the Twin Cities and the Houston Methodist Research Institute.