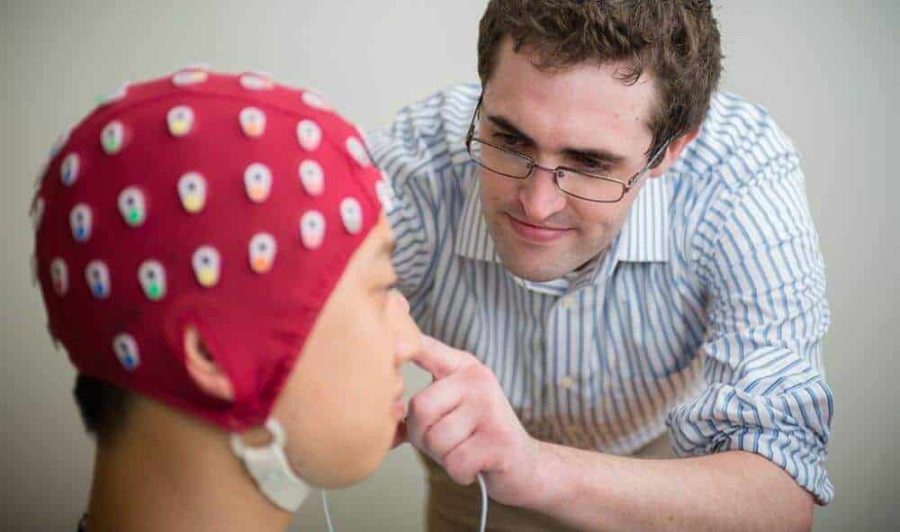 Were Albert Einstein and Leonardo da Vinci born brilliant or did they acquire their intelligence through effort?

No one knows for sure, but telling people the latter – that hard work trumps genes – causes instant changes in the brain and may make them more willing to strive for success, indicates a new study from Michigan State University.

The findings suggest the human brain is more receptive to the message that intelligence comes from the environment, regardless of whether it’s true. And this simple message, said lead investigator Hans Schroder, may ultimately prompt us to work harder.

“Giving people messages that encourage learning and motivation may promote more efficient performance,” said Schroder, a doctoral student in clinical psychology whose work is funded by the National Science Foundation. “In contrast, telling people that intelligence is genetically fixed may inadvertently hamper learning.”

In past research by Stanford University psychologist Carol Dweck, elementary students performing a task were either praised for their intelligence (“You’re so smart!”) or for their effort (“You worked really hard!”) after correct responses. As the task became harder, children in the first group performed worse after their mistakes compared to the group that had heard effort was important.

The MSU study, which appears online in the journal Biological Psychology, offers what could be the first physiological evidence to support those findings, in the form of a positive brain response. “These subtle messages seem to have a big impact, and now we can see they have an immediate impact on how the brain handles information about performance,” Schroder said.

For the study, two groups of participants read different articles. One article reported that intelligence is largely genetic, while the other said the brilliance of da Vinci and Einstein was “probably due to a challenging environment. Their genius had little to do with genetic structure.”

Participants were instructed to remember the main points of the article and completed a simple computer task while their brain activity was recorded. The findings, in a nutshell:

The study does not weigh in on the age-old “nature vs. nurture” debate, Schroder noted. Rather, it investigates the messages about the nature of abilities people are exposed to on a regular basis, from a teacher comforting a student (“It’s OK, not everyone can be a math person.”) to the sports announcer commenting on a player’s skill (“Wow, what a natural!”). These messages are thought to contribute to the attitudes or “mindsets” people hold about their intelligence and abilities.

The research started as part of Schroder’s honors thesis as an undergraduate at MSU working in the Clinical Psychophysiology Lab directed by Jason Moser, MSU assistant professor. Moser co-authored the study along with Tim Moran, an MSU graduate student in cognitive psychology, and Brent Donnellan, a former MSU professor who now works at Texas A&M University.

As an undergraduate and graduate student, Schroder has already co-written nine papers that have appeared in academic journals, including five as lead author. His work is supported by a three-year grant from the NSF’s Graduate Research Fellowship Program.

Read more about Schroder’s experience with research in this Student View.