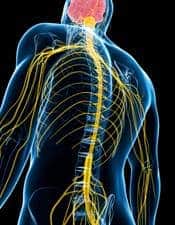 An international team of researchers has identified a new inherited neuromuscular disorder. The rare condition is the result of a genetic mutation that interferes with the communication between nerves and muscles, resulting in impaired muscle control.

The new disease was diagnosed in two families – one in the U.S. and the other in Great Britain – and afflicts multiple generations. The discovery was published today in the American Journal of Human Genetics.

“This discovery gives us new insight into the mechanisms of diseases that are caused by a breakdown in neuromuscular signal transmission,” said David Herrmann, M.B.B.Ch., a professor in the Department of Neurology at the University of Rochester School of Medicine and Dentistry and co-lead author of the study. “It is our hope that these findings will help identify new targets for therapies that can eventually be used to treat these diseases.”

The focus of the research is the neuromuscular junction, the point at which the axon fibers that extend from peripheral nerves meet the muscle cells. The chemical signals that pass across the junction are essential for motor function.

There are a number of disorders  – both acquired and inherited – that interfere with the communication that occurs at the neuromuscular junction. For example, in Lambert-Eaton myasthenic syndrome, which is most commonly triggered by certain cancers, the body’s own immune system attacks the neuromuscular junction, interrupting signal transmission. These diseases, which are rare, result in muscle weakness and fatigue, primarily in the limbs.

While the families in the study had at one point been diagnosed with other neuromuscular conditions, the researchers identified them as unique, due to their particular motor abnormalities, including problems resembling Lambert-Eaton, and because the disease was passed from one generation to the next.

The researchers compiled a genetic profile of the family members. Specifically, they analyzed the section of DNA code responsible for creating proteins using a technique called whole exome sequencing.

They discovered that the two different families had mutations in the code that creates the protein synaptotagmin 2 (SYT2). Scientists have long understood the function of this protein, but it had never before been associated with a disease in humans.

SYT2 is present at the pre-synaptic terminal, the end of the nerve cell that sits at the neuromuscular junction and helps the cells sense fluctuations in calcium levels. Calcium plays an important role in the electrical function of cells and, in the case of the neuromuscular junction, helps dictate the release of acetylcholine, a chemical responsible for passing communication between the nerve and muscle cells.

In the two families, the mutation disrupted the ability of the nerve cells to sense the changes in calcium levels that would normally trigger the release of acetylcholine. As a result, communication was disrupted and muscle control was impaired.

The authors have used the mutation in SYT2 to create a fruit fly (drosophila) model of the disease. Fruit flies are an important research tool and the study of their neurobiology has contributed greatly to our understanding of neurological development and diseases and the researchers see this as a first step to the development of potential new therapies to treat the condition.