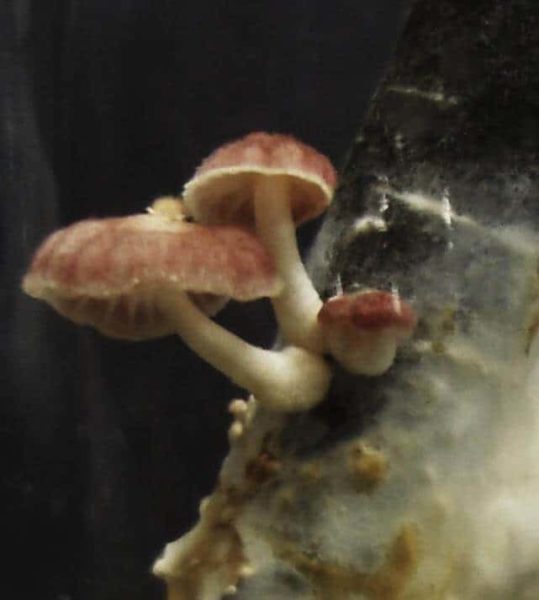 In the early 1900s, Brazil was the world’s largest producer of cocoa. Chocolate trees (Theobroma cacao) were cultivated in a 800, 000 ha region of rainforest in the state of Bahia, beneath a dense canopy of native shade trees. Whereas the surrounding rainforest was a biodiversity hotspot, the chocolate trees, which were derived mainly from a handful of seeds introduced in the mid 1700s, had very low levels of genetic variation. According to Brazilian scientist Gonçalo Pereira, “This scenario created a very romantic, but extremely fragile situation”.

Genetic variation is important for a population’s survival, as genetically variable populations are more resistant to pathogens. In 1989, disaster struck in the form of a devastating fungus named Moniliophthora perniciosa. In a ten-year period, the fungus eradicated around 70 percent of Brazil’s chocolate trees, resulting in an economic and social catastrophe that affected two million people.

At one stage of its lifecycle, Moniliophthora perniciosa takes on the form of enchanting pink mushrooms that seem to come straight from a fairytale (see picture). For the chocolate tree, however, M. perniciosa spells trouble. These mushrooms are filled with millions of spores that, once released, can enter a susceptible chocolate tree through surface wounds and tiny gaps called stomata and slowly kill the tree. Because infected trees develop bizarre green outgrowths that resemble brooms, the disease is known as witches’ broom disease. Two to three months after infection, the brooms turn brown and begin to perish. The fungus then completes its lifecycle by once again giving rise to clusters of spore-producing mushrooms. There is no known cure for this devastating disease.

In 2000, a team of scientists led by Gonçalo Pereira of the Universidade Estadual de Campinas in Brazil initiated the Witches’ Broom Genome Project, with the long-term aim of developing a cure for witches’ broom disease. A study to be published next week in The Plant Cell represents the culmination of their research to date. The team used a technique known as dual RNA-seq analysis to monitor the interaction between the M. perniciosa fungus and the chocolate tree. This technique allows scientists to reconstruct the battlefield between the chocolate tree and the fungus in unprecedented detail, by providing a readout of genes that are affected in the plant and the fungus during the course of witches’ broom disease.

“Knowing the molecular and physiological basis of a disease is an important step towards developing effective control strategies,” says study author Paulo Teixeira. Using healthy plants as a reference point, the scientists identified 1,967 genes that exhibited unique activities in the green broom structures of infected chocolate trees. An analysis of these genes showed that fungal infection triggers massive changes in the metabolism of the chocolate tree. Additionally, the scientists discovered 8,617 fungal genes that were active in green brooms. Using the Witches’ Broom Disease Transcriptome Atlas, a publicly available online tool developed by Pereira’s team to support studies of witches’ broom disease, the scientists identified 433 fungal genes that were particularly active in green brooms.

Many of these genes encoded proteins with presumed functions in the fungal disease mechanism. Study author Daniela Thomazella explains that “The discovery of sets of fungal genes that are most likely involved in pathogenicity paves the way for the development of targeted treatments of the disease”. Indeed, the authors are already using the results of this study to develop a novel fungicide that specifically targets M. perniciosa. In addition to increasing our knowledge of a devastating tropical disease, lead scientist Pereira maintains that this work provides an important basis for future studies that aim to improve agricultural sustainability and global food security.