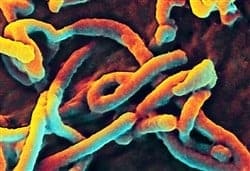 San Diego — A nasal vaccine in development by researchers at The University of Texas at Austin has been shown to provide long-term protection for non-human primates against the deadly Ebola virus. Results from a small pre-clinical study represent the only proof to date that a single dose of a non-injectable vaccine platform for Ebola is long-lasting, which could have significant global implications in controlling future outbreaks. This work is being presented Nov. 5 at the 2014 American Association of Pharmaceutical Scientists (AAPS) Annual Meeting and Exposition, the world’s largest pharmaceutical sciences meeting, in San Diego, Nov. 2-6.

The Ebola virus is an often fatal illness that is spread among the human population via direct contact with blood or bodily fluids from an infected individual. The current Ebola outbreak in Western Africa is the largest and most complex epidemic since the virus was first discovered in 1976, according to the World Health Organization. With a fatality rate currently as high as 70%, officials are declaring this outbreak a public health emergency of international concern.

Maria Croyle, a professor in the College of Pharmacy at The University of Texas at Austin, Kristina Jonsson-Schmunk, a graduate student in pharmacy, and colleagues at the university developed a nasal formulation that improved survival of immunized non-human primates from 67 percent (2 out of 3) to 100 percent (3 out of 3) after challenge with 1,000 plaque forming units of Ebola Zaire 150 days after immunization. This is important since only 50 percent of the primates given the vaccine by the standard route (intramuscular injection) survived challenge.

“Ebola causes devastating outbreaks with fatality rates of 25 – 90 percent in Africa and Asia. Although progress has been made in understanding the virus’ biology, no licensed vaccines or treatments currently exist. There is a desperate need for a vaccine that not only prevents the continued transmission from person to person, but also aids in controlling future incidences,” said Jonsson-Schmunk. “The main advantage of our vaccine platform over the others in clinical testing is the long-lasting protection after a single intranasal dose. This is important since the longevity of other vaccines for Ebola that are currently being evaluated is not fully understood. Moreover, the nasal spray immunization method is more attractive than a needle vaccine given the costs associated with syringe distribution and safety.”

The next stage of Dr. Croyle’s research is a Phase I clinical trial that tests the effectiveness of their vaccine in human subjects. They will also further explore preliminary data they have collected for administration of the vaccine as a thin film under the tongue in non-human primates.