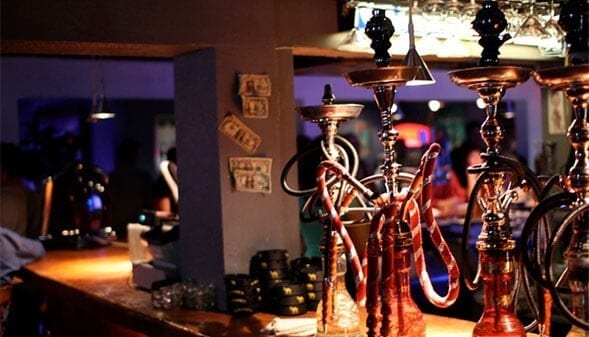 Many believe hookah is a safe alternative to smoking; this study suggests otherwise.

Hookah smokers, as well as nonsmokers exposed to hookah smoke at social events in hookah lounges, showed a significant increase in uptake of benzene, a chemical substance associated with an increased risk for leukemia, according to a study published in Cancer Epidemiology, Biomarkers & Prevention, a journal of the American Association for Cancer Research.

Some people believe that because hookah smoke is filtered through water before being inhaled, it’s somehow safer than smoking cigarettes or other forms of tobacco. But that’s simply not the case, according to Nada Kassem, associate director at the Center for Behavioral Epidemiology and Community Health at San Diego State University.

“Hookah smoking involves the use of burning charcoal that is needed to heat the hookah tobacco to generate the smoke that the smoker inhales,” Kassen said. “In addition to inhaling toxicants and carcinogens found in the hookah tobacco smoke, hookah smokers and nonsmokers who socialize with hookah smokers also inhale large quantities of charcoal combustion-generated toxic and carcinogenic emissions.”

For the study, Kassem and colleagues analyzed levels of S-phenylmercapturic acid (SPMA), a metabolite on benzene, in the urine of 105 hookah smokers and 103 nonsmokers. They obtained urine samples the morning of and the morning after participants attended a hookah-only smoking event at a hookah lounge or a private home.

Curiously, SPMA levels were found to be similarly high for the nonsmoking group both before and after the participants attended the private home event. Kassem believes this may be due to the nonsmokers’ chronic exposure to benzene prior to the study.

Taken together, the results indicate that smoking a hookah is no safer than other kinds of tobacco smoking—and that regulations should reflect that reality.

“In contrast to what is believed, hookah tobacco smoking is not a safe alternative to smoking other forms of tobacco,” Kassem said. “Because there is no safe level of exposure to benzene, our results call for interventions to reduce or prevent hookah tobacco use, regulatory actions to limit hookah-related exposure to toxicants including benzene, and include hookah smoking in clean indoor air legislation.”

The study was supported by the American Cancer Society and Flight Attendant Medical Research Institute.