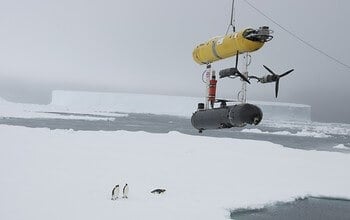 A National Science Foundation (NSF)-funded research team has successfully tested an autonomous underwater vehicle, AUV, that can produce high-resolution, three-dimensional maps of Antarctic sea ice.SeaBED, as the vehicle is known, measured and mapped the underside of sea-ice floes in three areas off the Antarctic Peninsula that were previously inaccessible.

The results of the research were published this week in the journal Nature Geoscience. Scientists at the Institute of Antarctic and Marine Science (Australia), Antarctic Climate and Ecosystem Cooperative Research Centre (Australia), Woods Hole Oceanographic Institution (USA) and British Antarctic Survey (U.K.) jointly carried out the project.

Ted Maksym, an NSF-funded researcher at Woods Hole and co-author of the Nature paper, said the successful SeaBED deployment is an important first step toward making the kinds of routine underwater measurements needed to help monitor and understand large-scale changes in sea ice.

“What this effort does is show that observations from AUVs under the ice are possible and there is a very rich data set that you can get from them,” he said. “This work is an important step toward making the kinds of routine measurements we need in order to really monitor and understand what’s happening with the ice and the large scale changes that are occurring.”

While most oceanographic survey instruments look down at the seafloor, SeaBED’s upward-looking sonar allowed it to map under the ice, said Woods Hole engineering scientist Hanumant Singh, whose lab designed, built and operated the AUV.

The AUV operated at a depth of 20 to 30 meters (65 to 98 feet) and was driven in a “lawnmower pattern.” These lines of data were merged to form high-resolution 3-D bathymetric surveys of the underside of the ice. The yellow SeaBED robot, which is approximately two meters (six feet) long and weighs nearly 200 kilograms (440 pounds), has a twin-hull design that gives the robot enhanced stability for low-speed photographic surveys.

“Putting an AUV together to map the underside of sea ice is challenging from a software, navigation and acoustic communications standpoint,” said Singh.

“SeaBED’s maneuverability and stability made it ideal for this application where we were doing detailed floe-scale mapping and deploying, as well as recovering in close-packed ice conditions,” he added. “It would have been tough to do many of the missions we did, especially under the conditions we encountered, with some of the larger vehicles.”

NSF supported the development and deployment of SeaBED to advance the state-of-the-art of these ocean-going instruments as remote sensors in extreme environments.

Scientists use a range of technologies and techniques to measure sea ice thickness. Satellite observations can measure large-scale thickness from space, but interpreting the data accurately can be difficult due to snow cover on the ice. Measurements made on the sea ice by drilling holes, together with visual observations from ships are critical for building a more complete picture, but difficulties in getting access to thicker areas of sea ice leave gaps in the data. Now, with the SeaBED, scientists have an invaluable new tool to fill this gap.