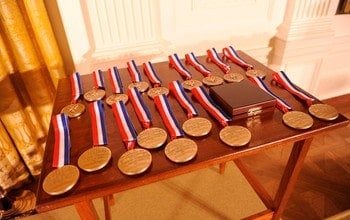 At a White House ceremony last Thursday, President Obama presented the National Medal of Science and National Medal of Technology and Innovation to individuals who have made outstanding contributions to science and engineering. The awards are the nation’s highest honors for achievement and leadership in advancing the fields of science and technology.

“The story of these trailblazers reflects our bigger American story of constant transformation,” President Obama said. “They represent the spirit that has always defined the American people, one of restless searching for the right solution to any problem; an inclination to dream big dreams; and an insistence on making those dreams come true.”

Administered for the White House by the National Science Foundation (NSF), the National Medal of Science was established by the 86th Congress in 1959 as a presidential award to be given to individuals “deserving of special recognition by reason of their outstanding contributions to knowledge in the physical, biological, mathematical or engineering sciences.” In 1980 Congress expanded this recognition to include the social and behavioral sciences.

The National Medal of Technology and Innovation was created by statute in 1980 and is administered for the White House by the U.S. Department of Commerce’s Patent and Trademark Office. The award recognizes those who have made lasting contributions to America’s competitiveness and quality of life and helped strengthen the nation’s technological workforce.

Awarded annually, the Medal honors the Nation’s visionary thinkers whose creativity and intellect have made a lasting impact on the United States and its workforce. The President receives nominations from a committee of presidential appointees based on their extraordinary knowledge of chemistry, engineering, computing, mathematics, and the biological, behavioral/social, and physical sciences.

Among this year’s 10 recipients of the National Medal of Science, nine received NSF support at some point in their research careers, for a cumulative total of more than $35 million.

A committee of 12 scientists and engineers is appointed by the president to evaluate the nominees for the award. Since its establishment, the National Medal of Science has been awarded to 487 distinguished scientists and engineers whose careers spanned decades of research and development. The recipients database, with information from 1962 to the present, is searchable by name, affiliation and other criteria.

The names, affiliations, and short biographies of this year’s National Medal of Science Laureates follow:

Bruce Alberts is an internationally-renowned biochemist and Professor Emeritus at the University of California, San Francisco. In addition to his research in the field of DNA replication, he is an avid proponent of improving science and mathematics education and international scientific cooperation.

Robert Axelrod is renowned for his work on the evolution of cooperation and its application across disciplines, from the social sciences to biology and computer science. He is a professor in the Department of Political Science and the Gerald R. Ford School of Public Policy at the University of Michigan.

May Berenbaum, University of Illinois at Urbana-Champaign

May Berenbaum‘s pioneering studies of insect-plant co-evolution and her extensive public engagement have made her a world-renowned expert on all insect-related matters. Dr. Berenbaum is Professor and Head of the Department of Entomology at the University of Illinois at Urbana-Champaign.

Alexandre Chorin is an applied mathematician known for his contributions to computational fluid mechanics. He is a professor of mathematics at the University of California, Berkeley, and a senior scientist at the U.S. Department of Energy’s Lawrence Berkeley National Laboratory.

Thomas Kailath is an electrical engineer known for his contributions to the information and system sciences. He is currently the Hitachi America Professorship of Engineering, Emeritus at Stanford University.

Judith Klinman is a physical-organic chemist renowned for her work on enzymes. She is currently a professor of chemistry and of molecular and cell biology at the University of California, Berkeley.

Jerrold Meinwald is considered one of the fathers of chemical ecology. He is currently the Goldwin Smith Professor of Chemistry Emeritus at Cornell University.

Burton Richter is a Nobel Prize-winning physicist known for co-discovering the J/Psi meson. He is the Paul Pigott Professor in the Physical Sciences at Stanford University.

Geophysicist Sean Solomon is director of the Lamont-Doherty Earth Observatory of Columbia University, where he is also the William B. Ransford Professor of Earth and Planetary Science.

And a posthumous Medal to:

David Blackwell (1919-2010) was a towering figure in the fields of probability, statistics, and the mathematical sciences. He was a professor emeritus of mathematics and statistics at the University of California, Berkeley.

For more information on the National Medal of Technology and Innovation please visit its website.