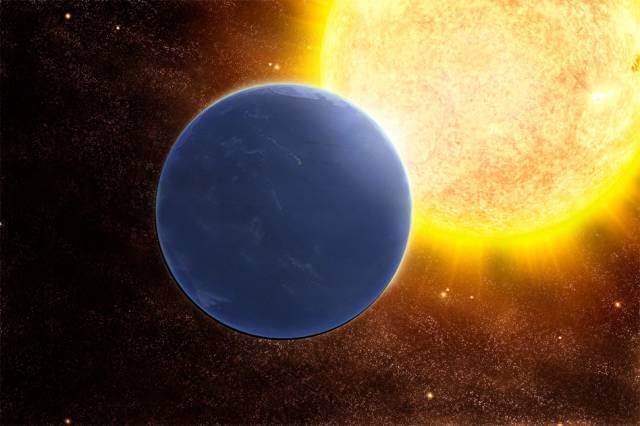 MIT study finds an exoplanet, tilted on its side, could still be habitable if covered in ocean.

Nearly 2,000 planets beyond our solar system have been identified to date. Whether any of these exoplanets are hospitable to life depends on a number of criteria. Among these, scientists have thought, is a planet’s obliquity — the angle of its axis relative to its orbit around a star.

Earth, for instance, has a relatively low obliquity, rotating around an axis that is nearly perpendicular to the plane of its orbit around the sun. Scientists suspect, however, that exoplanets may exhibit a host of obliquities, resembling anything from a vertical spinning top to a horizontal rotisserie. The more extreme the tilt, the less habitable a planet may be — or so the thinking has gone.

Now scientists at MIT have found that even a high-obliquity planet, with a nearly horizontal axis, could potentially support life, so long as the planet were completely covered by an ocean. In fact, even a shallow ocean, about 50 meters deep, would be enough to keep such a planet at relatively comfortable temperatures, averaging around 60 degrees Fahrenheit year-round.

David Ferreira, a former research scientist in MIT’s Department of Earth, Atmospheric and Planetary Sciences (EAPS), says that on the face of it, a planet with high obliquity would appear rather extreme: Tilted on its side, its north pole would experience daylight continuously for six months, and then darkness for six months, as the planet revolves around its star.

“The expectation was that such a planet would not be habitable: It would basically boil, and freeze, which would be really tough for life,” says Ferreira, who is now a lecturer at the University of Reading, in the United Kingdom. “We found that the ocean stores heat during summer and gives it back in winter, so the climate is still pretty mild, even in the heart of the cold polar night. So in the search for habitable exoplanets, we’re saying, don’t discount high-obliquity ones as unsuitable for life.”

Details of the group’s analysis are published in the journal Icarus. The paper’s co-authors are Ferreira; Sara Seager, the Class of 1941 Professor in EAPS and MIT’s Department of Physics; John Marshall, the Cecil and Ida Green Professor in Earth and Planetary Sciences; and Paul O’Gorman, an associate professor in EAPS.

Tilting toward a habitable exoplanet

Ferreira and his colleagues used a model developed at MIT to simulate a high-obliquity “aquaplanet” — an Earth-sized planet, at a similar distance from its sun, covered entirely in water. The three-dimensional model is designed to simulate circulations among the atmosphere, ocean, and sea ice, taking into the account the effects of winds and heat in driving a 3000-meter deep ocean. For comparison, the researchers also coupled the atmospheric model with simplified, motionless “swamp” oceans of various depths: 200 meters, 50 meters, and 10 meters.

The researchers used the detailed model to simulate a planet at three obliquities: 23 degrees (representing an Earth-like tilt), 54 degrees, and 90 degrees.

For a planet with an extreme, 90-degree tilt, they found that a global ocean — even one as shallow as 50 meters — would absorb enough solar energy throughout the polar summer and release it back into the atmosphere in winter to maintain a rather mild climate. As a result, the planet as a whole would experience spring-like temperatures year round.

“We were expecting that if you put an ocean on the planet, it might be a bit more habitable, but not to this point,” Ferreira says. “It’s really surprising that the temperatures at the poles are still habitable.”

In general, the team observed that life could thrive on a highly tilted aquaplanet, but only to a point. In simulations with a shallower ocean, Ferreira found that waters 10 meters deep would not be sufficient to regulate a high-obliquity planet’s climate. Instead, the planet would experience a runaway effect: As soon as a bit of ice forms, it would quickly spread across the dark side of the planet. Even when this side turns toward the sun, according to Ferreira, it would be too late: Massive ice sheets would reflect the sun’s rays, allowing the ice to spread further into the newly darkened side, and eventually encase the planet.

“Some people have thought that a planet with a very large obliquity could have ice just around the equator, and the poles would be warm,” Ferreira says. “But we find that there is no intermediate state. If there’s too little ocean, the planet may collapse into a snowball. Then it wouldn’t be habitable, obviously.”

Darren Williams, a professor of physics and astronomy at Pennsylvania State University, says past climate modeling has shown that a wide range of climate scenarios are possible on extremely tilted planets, depending on the sizes of their oceans and landmasses. Ferreira’s results, he says, reach similar conclusions, but with more detail.

“There are one or two terrestrial-sized exoplanets out of a thousand that appear to have densities comparable to water, so the probability of an all-water planet is at least 0.1 percent,” Williams says. “The upshot of all this is that exoplanets at high obliquity are not necessarily devoid of life, and are therefore just as interesting and important to the astrobiology community.”