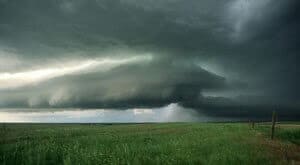 A new study in Geophysical Research Letters offers for the first time unequivocal evidence that large storms move significant amounts of ozone from the stratosphere down to the troposphere, the lowest part of the atmosphere. The finding has implications for global climate because tropospheric ozone is a powerful greenhouse gas as well as a pollutant that affects human health and the environment.

The research, led by NCAR scientist Laura Pan, means that scientists may have to re-evaluate climate models with regard to the transport of ozone. Those models generally do not include the role of thunderstorms, as they deal with larger and longer-range phenomena.

It was already well established that tropospheric ozone originates in significant measure in the stratosphere. But the transport was primarily attributed to jet streams and other sources of circulation.

The new study has its roots in a 2012 field project, known as the Deep Convective Clouds and Chemistry Experiment (DC3), that was based in the Great Plains and focused on the impact of storms on chemical composition of the atmosphere. On the night of May 30, the research aircraft flew through a line of large thunderstorms over Kansas. One of the research aircraft, the NASA DC-8, flew just above the storms in the lower stratosphere, carrying an instrument known as a Differential Absorption Lidar, or DIAL, to measure ozone levels.

Pan subsequently discovered that, during that flight, the DIAL instrument recorded a phenomenon that was only hinted before but never observed in an unambiguous fashion. Above the leading edge of the eastward moving storm, DIAL registered a curtain of ozone dipping below the stratosphere, where it was relatively abundant, into the troposphere. On a graph, this ozone-rich air resembled a ram’s horn whose wide end was pushed eastward ahead of the storm and whose narrow end curved westward into the storm.

By examining the DIAL data and those from other instruments, the scientists determined that the “ram’s horn,” containing 150 parts per billion by volume (ppbv) of ozone, extended down to an altitude of about 8 km—or about 4 km (~2.5 miles) into the troposphere. At the same altitudes, but away from the storm system, ozone accounted for only 60 to 100 ppbv. In addition, thin filaments of the enhanced ozone extended about 100 km from the cloud’s edge.

The researchers then set out to study the ozone transport process by numerically simulating the May 30 storm. Their simulation reproduced the ram’s horn and other observations made during the flight, demonstrating that deep convective storms like the one studied are capable of perturbing the tropopause, normally a stable barrier between stratosphere and troposphere.

The authors say that the phenomenon challenges global chemistry climate models, since hundreds of storms like the one observed occur over the United States every summer, adding an as yet undermined quantity of ozone into the troposphere. Further, they say, as storm behavior may change in an evolving climate, it is important to understand and incorporate this process into global chemistry-climate models.