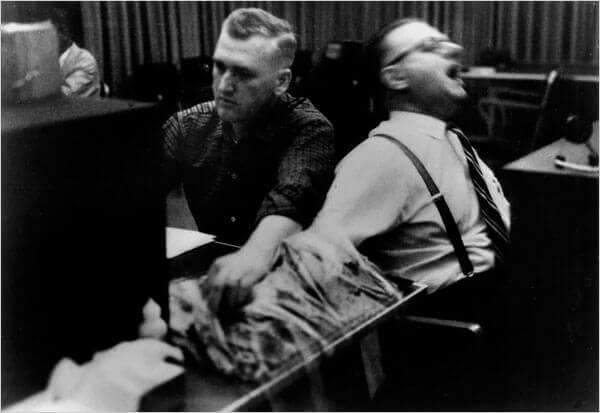 In 1961, with memories of Holocaust atrocities and the prosecution of Nazi officials at Nuremburg still fresh, psychologist Stanley Milgram undertook a series of now infamous experiments on obedience and reprehensible behavior.

About two-thirds of Milgram’s nearly 800 study subjects, pressed by an authoritative experimenter, were willing to administer increasingly powerful electric shocks to an unseen stranger despite cries of agony and pleas to stop.

“Milgram claimed to have found sort of a dark side to human nature that people were not quite as attuned to,” says Matthew Hollander, a graduate student in sociology at the University of Wisconsin-Madison. “His study participants were much more likely to obey than he expected, and that was an understandably uncomfortable result.”

But Milgram divided his subjects into just two categories: obedient or disobedient. After examining the experiences of more than 100 of Milgram’s participants, Hollander sees a great deal more nuance in their performances — and maybe a way to prevent real-world occurrences of authority overriding ethical judgment.

“The majority did cave, and follow the experimenter’s orders,” says Hollander, whose findings were published online today by the British Journal of Social Psychology. “But a good number of people resisted, and I’ve found particular ways they did that, including ways of resisting that they share with the people who ultimately complied.”

Some are less insistent. Hollander found study subjects resorting to silence and hesitation, groaning and sighing to display the effort it took to comply, and (typically uncomfortable) laughter.

They also found more explicit ways to express their discomfort and disagreement. Subjects stalled by talking to the recipient of the shocks and by addressing their concerns to the experimenter. Most assertively, they resorted to what Hollander calls the “stop try.”

“Before examining these recordings, I was imagining some really aggressive ways of stopping the experiment — trying to open the door where the ‘learner’ is locked in, yelling at the experimenter, trying to leave,” Hollander says. “What I found was there are many ways to try to stop the experiment, but they’re less aggressive.”

Interestingly, all six of the resistive actions were put to use by obedient and disobedient participants.

“What this shows is that even those who were ultimately compliant or obedient had practices for resisting the invocation of the experimenter’s authority,” says Douglas Maynard, a UW-Madison sociology professor who leads the Garfinkel Laboratory for Ethnomethodology and Conversation Analysis. “It wasn’t like they automatically caved in. They really worked to counter what was coming at them. It wasn’t a blind kind of obedience.”

If people could be trained to tap practices for resistance like those outlined in Hollander’s analysis, they may be better equipped to stand up to an illegal, unethical or inappropriate order from a superior. And not just in extreme situations, according to Maynard.

“It doesn’t have to be the Nazis or torture at Abu Ghraib prison in Iraq or in the CIA interrogations described in the recent U.S. Senate report,” he says. “Think of the pilot and copilot in a plane experiencing an emergency or a school principal telling a teacher to discipline a student, and the difference it could make if the subordinate could be respectfully, effectively resistive and even disobedient when ethically necessary or for purposes of social justice.”