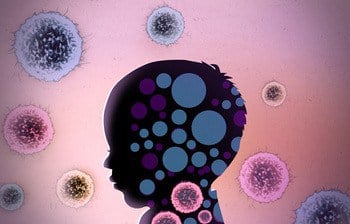 Virginia Tech Carilion Research Institute scientists have developed a brain-imaging technique that may be able to identify children with autism spectrum disorder in just two minutes.

This test, while far from being used as the clinical standard of care, offers promising diagnostic potential once it undergoes more research and evaluation.

“Our brains have a perspective-tracking response that monitors, for example, whether it’s your turn or my turn,” said Read Montague, the Virginia Tech Carilion Research Institute professor who led the study.

“This response is removed from our emotional input, so it makes a great quantitative marker,” he said. “We can use it to measure differences between people with and without autism spectrum disorder.”

The finding, expected to be published online next week in Clinical Psychological Science, demonstrates that the perspective-tracking response can be used to determine whether someone has autism spectrum disorder.

Usually, diagnosis – an unquantifiable process based on clinical judgment – is time consuming and trying on children and their families. That may change with this new diagnostic test.

The path to this discovery has been a long, iterative one. In a 2006 study by Montague and others, pairs of subjects had their brains scanned using functional magnetic resonance imaging, or MRI, as they played a game requiring them to take turns.

From those images, researchers found that the middle cingulate cortex became more active when it was the subject’s turn.

“A response in that part of the brain is not an emotional response, and we found that intriguing,” said Montague, who also directs the Computational Psychiatry Unit at the Virginia Tech Carilion Research Institute and is a professor of physics at Virginia Tech. “We realized the middle cingulate cortex is responsible for distinguishing between self and others, and that’s how it was able to keep track of whose turn it was.”

That realization led the scientists to investigate how the middle cingulate cortex response differs in individuals at different developmental levels. In a 2008 study, Montague and his colleagues asked athletes to watch a brief clip of a physical action, such as kicking a ball or dancing, while undergoing functional MRI.

The athletes were then asked either to replay the clips in their mind, like watching a movie, or to imagine themselves as participants in the clips.

“The athletes had the same responses as the game participants from our earlier study,” Montague said. “The middle cingulate cortex was active when they imagined themselves dancing – in other words, when they needed to recognize themselves in the action.”

In the 2008 study, the researchers also found that in subjects with autism spectrum disorder, the more subdued the response, the more severe the symptoms.

Montague and his team hypothesized that a clear biomarker for self-perspective exists and that they could track it using functional MRI. They also speculated that the biomarker could be used as a tool in the clinical diagnosis of people with autism spectrum disorder.

In 2012, the scientists designed another study to see whether they could elicit a brain response to help them compute the unquantifiable. And they could: By presenting self-images while scanning the brains of adults, they elicited the self-perspective response they had previously observed in social interaction games.

In the current study, with children, subjects were shown 15 images of themselves and 15 images of a child matched for age and gender for four seconds per image in a random order.

Like the control adults, the control children had a high response in the middle cingulate cortex when viewing their own pictures. In contrast, children with autism spectrum disorder had a significantly diminished response.

Importantly, Montague’s team could detect this difference in individuals using only a single image.

Montague and his group realized they had developed a single-stimulus functional MRI diagnostic technique. The single-stimulus part is important, Montague points out, as it enables speed. Children with autism spectrum disorder cannot stay in the scanner for long, so the test must be quick.

“We went from a slow, average depiction of brain activity in a cognitive challenge to a quick test that is significantly easier for children to do than spend hours under observation,” Montague said. “The single-stimulus functional MRI could also open the door to developing MRI-based applications for screening of other cognitive disorders.”

By mapping psychological differences through brain scans, scientists are adding a critical component to the typical process of neuropsychiatric diagnosis – math.

Montague has been a pioneering figure in this field, which he coined computational psychiatry. The idea is that scientists can link the function of mental disorders to the disrupted mechanisms of neural tissue through mathematical approaches. Doctors then can use measurable data for earlier diagnosis and treatment.

An earlier diagnosis can also have a tremendous impact on the children and their families, Montague said.

“The younger children are at the time of diagnosis,” Montague said, “the more they can benefit from a range of therapies that can transform their lives.”