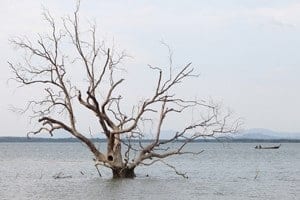 Global sea-level has been rising about 2.5 times faster during the past 20 years than it has for the preceding eight decades of the 20th century, according to a newly published study in the journal Nature.

Researchers at Rutgers and Harvard universities found that between 1901 and 1990 sea-level rose at a mean rate of about 1.2 millimeters per year, compared to about 1.5 millimeters as calculated in earlier estimates. The global mean rate of rise was about 3 millimeters.

The new research, “Probabilistic Reanalysis of 20th-century Sea-level Rise,” takes a new look at global tide gauge data. Using a combination of computer modeling and statistical analysis, the researchers sought to close data gaps in accounting for the sources of sea-level rise.

The Intergovernmental Panel on Climate Change – the international group charting the Earth’s climate trends – has come up short in fully explaining the source of new water flows to the oceans in past decades.

Over the past century, mountain glacier meltwater from the continents was a big source for sea- level change, the Rutgers-Harvard team said. But calculations taken after 1993 represent another sign that Greenland and Antarctica ice cap melting is driving the changes now.

“In the last 20 years we’re looking at significant contributions from Greenland and Antarctica,” where ice melt is driving the higher rate, said Carling Hay, a postdoctoral fellow with both Rutgers and Harvard universities and corresponding author on the Nature paper.

New Jersey is on the front line of that change because sea level is rising faster along the East Coast of the United States. “The global rate of sea level change is important,” Hay said. “But what really affects coastal communities is the regional change.”

The revised lower rate of 20th century rise “makes the ice sheet melt of the past two years even more stark by comparison,” said co-author Robert Kopp, an associate professor with the Department of Earth and Planetary Science at Rutgers, and associate director of the Rutgers Energy Institute.

On top of that, “the whole planet has been warming and the oceans have been picking up heat” and that thermal contributes to rise, he added.

The findings reinforce warnings from other climate scientists that water rising three feet or more is possible by the end of the 21st century.

As a global study, the project drilled down to local rates of sea level rise on coasts around the world. But on the U.S. mid-Atlantic coast, scientists already know there’s a combination of coastal lands subsiding and a faster rate of rise – so much that some experts are urging Shore homeowners hit by Hurricane Sandy to rebuild a couple of feet higher than recommended by new federal flood insurance guidelines.

With Jerry Mitrovica of Harvard and Eric Morrow, a postdoctoral fellow with Rutgers and Harvard, the researchers applied new analysis of planetary physics to the sea-level question, looking not just at ice melting in Greenland and Antarctica, but Earth’s gravity, regional climate and geology.

“It’s not like putting water in a bathtub,” said Kopp, who works on climate change, sea -level rise and energy issues. “Sea level rises at different rates in different places.”

The higher estimates for 20th century sea-level change appeared to be biased by the fact that tide gauges are more plentiful in the harbors of industrial nations of the northern hemisphere – skewing the first 80 years of 20th-century estimates higher, the authors wrote.

New Jersey’s shoreline has gone back and forth in ways unimaginable today. During one warm period 125,000 years ago, sea levels may have been almost 20 feet higher, with waves breaking near where today’s Garden State Parkway skirts the South Jersey marshlands, geologists say.

That’s how the sea level study started, Kopp said: “We’re really trying to understand the source of that rise.”

“We were looking at paleo (prehistoric) sources,” and wondered how that methodology might be applicable in modern times, Hay recalled.

“This is a rigorous analysis that demonstrates that resolves nagging questions about rates of sea-level rise from global tide gauges,” said Kenneth G. Miller, a geologist and distinguished professor with the Rutgers Department of Earth and Planetary Sciences. Miller dedicated much of his career to studying ancient changes in sea level, and now he’s one of those experts urging coastal residents to prepare for higher water.

The finding that earlier sea level was slightly lower – followed by the jump in rates during the 1990s – “strengthens the evidence for an increase in the rate of sea-level rise,” Miller said.