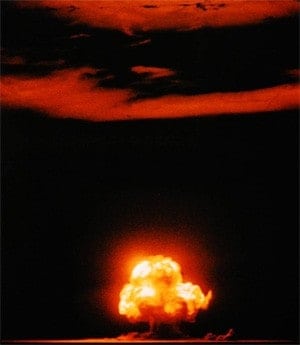 An international group of scientists has recommended that the fateful Trinity nuclear test on July 16, 1945, be considered the dawn of a new geological age dubbed the Anthropocene – an era in which humans increasingly shape the planet.

Scientists divide Earth history into epochs, periods and other time units bounded by geological or biological signals, such as those left in the rock record by the mass extinctions that ended the Cretaceous and Permian eras, and the end of the last ice age that kicked off the current Holocene epoch.

“Defining the Anthropocene as a new geological epoch would imply that humans are a geological force every bit as powerful as the ‘natural’ ones that caused such things as the onset of ice ages and major extinction events in Earth’s past,” said paleontologist Anthony Barnosky, one of the co-authors on the paper and a UC Berkeley professor of integrative biology.

The recommendation, published online this week in the journal Quaternary International, was made by 26 members of the 38-member Anthropocene Working Group, an international panel charged with assembling evidence on whether the Anthropocene should be formally designated as a new geological epoch and, if so, where to place its beginning.

The term “Anthropocene” was coined by Nobel Prize-winning atmospheric chemist Paul Crutzen and and the late University of Michigan biologist Eugene Stoermer in 2000 to denote the time interval in Earth’s history during which many geologically significant conditions and processes became forever altered by human activities.

The team argued that a logical and tractable start-point for the Anthropocene would be the date of the first atomic bomb detonation in New Mexico, Barnosky said, in part because it can be measured easily as a result of the worldwide spread of artificial radioactivity from nuclear bomb tests, and in part because it roughly coincides with the global proliferation of major human-caused influences that leave permanent evidence in the geological record. Since 1945, there has been a “Great Acceleration” of population, carbon emissions, species invasions and extinctions, earth moving, and production of concrete, plastics and metals, as pointed out by another new paper in the journal The Anthropocene Review.

The Trinity test, the first controlled nuclear explosion, was the result of the Manhattan Project directed by UC Berkeley physicist J. Robert Oppenheimer. Various UC Berkeley scientists contributed to the war effort, which resulted in two bombs being dropped on Japanese cities and numerous above- and below-ground tests that have left a distinctive radioactive signature around the globe.

The Anthropocene Working Group hopes to present a formal proposal defining the Holocene/Anthropocene boundary as early as 2016 for consideration by the International Commission on Stratigraphy.

The team proposing to mark the beginning of the Anthropocene with a nuclear blast was led by the working group chair Jan Zalasiewicz and group secretary Mark Williams, both of the University of Leicester’s Department of Geology.

“Like any geological boundary, it is not a perfect marker – levels of global radiation really rose in the early 1950s, as salvos of bomb tests took place,” Zalasiewicz said in a press statement. “But it may be the optimal way to resolve the multiple lines of evidence on human-driven planetary change.”

Barnosky emphasized that “the Anthropocene Working Group is not setting any boundary in stone yet.”

Within a few days of the Trinity blast proposal, a different proposal was published in The Anthropocene Review by six other members of the group, suggesting that human-modified soils could also feasibly be used to demarcate a boundary, albeit one that encompassed a longer span of time than a single nuclear blast.

For now, the jury remains out. “Time – and much more discussion – will tell,” Zalasiewicz said.

For another perspective, see this blog post by Andy Revkin of the New York Times.