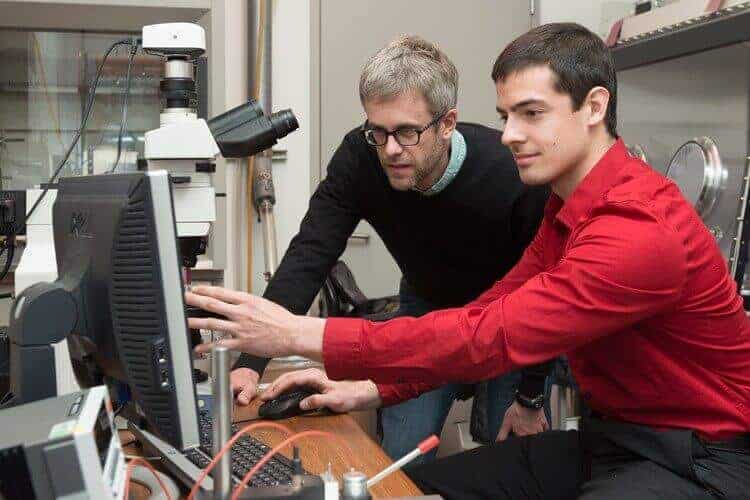 Stacking perovskites, a crystalline material, onto a conventional silicon solar cell dramatically improves the overall efficiency of the cell, according to a new study led by Stanford University scientists.

“We’ve been looking for ways to make solar panels that are more efficient and lower cost,” said study co-author Michael McGehee, a professor of materials science and engineering at Stanford. “Right now, silicon solar cells dominate the world market, but the power conversion efficiency of silicon photovoltaics has been stuck at 25 percent for 15 years.”

One cost-effective way to improve efficiency is to build a tandem device made of silicon and another inexpensive photovoltaic material, he said.

“Making low-cost tandems is very desirable,” McGehee said. “You simply put one solar cell on top of the other, and you get more efficiency than either could do by itself. From a commercial standpoint, it makes a lot of sense to use silicon for the bottom cell. Until recently, we didn’t have a good material for the top cell, then perovskites came along.”

Perovskite is a crystalline material that is inexpensive and easy to produce in the lab. In 2009, scientists showed that perovskites made of lead, iodide and methylammonium could convert sunlight into electricity with an efficiency of 3.8 percent. Since then, researchers have achieved perovskite efficiencies above 20 percent, rivaling commercially available silicon solar cells and spawning widespread interest among silicon manufacturers.

“Our goal is to leverage the silicon factories that already exist around the world,” said Stanford graduate student Colin Bailie, co-lead author of the study. “With tandem solar cells, you don’t need a billion-dollar capital expenditure to build a new factory. Instead, you can start with a silicon module and add a layer of perovskite at relatively low cost.”

Solar cells work by converting photons of sunlight into an electric current that moves between two electrodes. Silicon solar cells generate electricity by absorbing photons of visible and infrared light, while perovskite cells harvest only the visible part of the solar spectrum where the photons have more energy.

A key roadblock to building an efficient perovskite-silicon tandem has been a lack of transparency.

Perovskites are easily damaged by heat and readily dissolve in water. This inherent instability ruled out virtually all of the conventional techniques for applying electrodes onto the perovskite solar cell, so Bailie did it manually.

“By combining two cells with approximately the same efficiency, you can get a very large efficiency boost,” Bailie said.

The results were impressive.

“We improved the 11.4 percent silicon cell to 17 percent as a tandem, a remarkable relative efficiency increase of nearly 50 percent,” McGehee said. “Such a drastic improvement in efficiency has the potential to redefine the commercial viability of low-quality silicon.”

“Since most, if not all, of the layers in a perovskite cell can be deposited from solution, it might be possible to upgrade conventional solar cells into higher-performing tandems with little increase in cost,” the authors wrote.

A big unanswered question is the long-term stability of perovskites, McGehee added.

“Silicon is a rock,” he said. “You can heat it to about 600 degrees Fahrenheit, shine light on it for 25 years, and nothing will happen. But if you expose perovskite to water or light, it likely will degrade. We have a ways to go to show that perovskite solar cells are stable enough to last 25 years. My vision is that some day we’ll be able to get low-cost tandems that are 25 percent efficient. That’s what companies are excited about. In five to 10 years, we could even reach 30 percent efficiency.”

This work was primarily supported by the U.S. Department of Energy through the Bay Area Photovoltaic Consortium at Stanford, and by Stanford’s Global Climate and Energy Project.