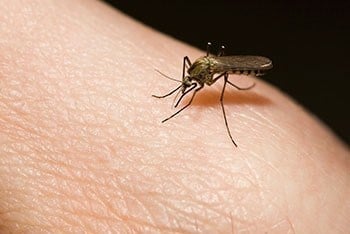 It may seem obvious, but before a mosquito passes along a disease like malaria to a human, it must become infected by a parasite, too. And just like a person, a mosquito has an immune system that works hard to fight off infection so it doesn’t get sick.

A new study by the School of Veterinary Medicine’s Michael Povelones and colleagues shows that the mosquito immune system is more canny than once thought.

The research indicates that the insect’s immune system proteins spring into action after a mosquito feeds on blood—an act that is critical to its survival and reproduction, but also potentially risky because of the pathogens that blood might contain.

“This appears to be a new mechanism by which the mosquito is anticipating a parasite infection,” says Povelones, an assistant professor in Penn Vet’s Department of Pathobiology.

While a research associate at Imperial College London, Povelones teamed with colleagues to begin examining a class of proteins called LRIMs. A few members of this class had previously shown to have a role in defending against a parasite that causes malaria in rodents, which is related to the one that causes human malaria.

The researchers found one protein, LRIM9, that appeared to play a critical role in protecting mosquitoes against rodent malaria. It was also highly expressed in adult females—the only mosquitoes that consume blood.

“That turned the focus toward blood feeding,” Povelones says.

It turned out that it didn’t matter whether mosquitoes ingested blood that was infected with malaria or uninfected blood: Either way, LRIM9 levels increased dramatically 48 hours after feeding.

To see if LRIM9 could be responding to bacteria in the blood, the researchers fed the mosquitoes antibiotics to kill off gut microbes. Still, LRIM9 levels surged.

Finally, the researchers tested whether a hormone called ecdysone might be triggering the activation of LRIM9. Ecdysone, a prohormone that is metabolized into a compound called 20E, is secreted by the ovaries after blood feeding and regulates genes important to reproduction.

Povelones suspects that LRIM9 might be only part of a larger pathway regulated by ecdysone and perhaps other hormones that act to bolster a mosquito’s immune defenses and protect against parasite infection after consuming a blood meal.

Gaining a better understanding of the mosquito’s natural immune response to malaria could help in the search for a stop to malaria, he says.

“If we can use that information to our advantage, we might be able to find new avenues of preventing mosquitoes from transmitting disease.”