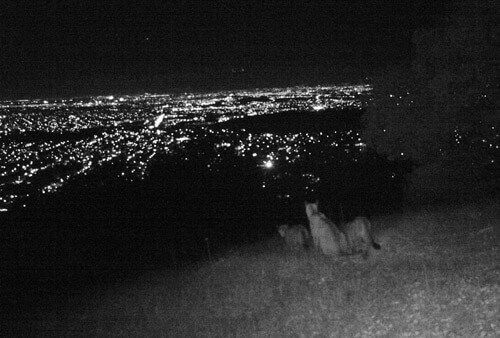 The presence of humans – homes, roads, and other development – means pumas are fearful and stay on the move rather than returning to a kill site to fully consume prey, the study finds.

“We investigated how higher housing densities influenced puma behavior at kills and how often they killed,” said Justine A. Smith, a Ph.D. candidate in the UC Santa Cruz Environmental Studies Department. “We found that female pumas spent less time feeding at kill sites as housing increases.”

The effects can impact deer populations as well as puma breeding success, Smith and her coauthors write in the journal Proceedings of the Royal Society B. “Females killed 36 percent more deer per year in developed habitats than in areas with little housing,” Smith said. “Increased kill rates may lead carnivores to waste energy and also influence prey survival rates in human-modified landscapes.”

“We conclude that food loss and high energy costs due to human avoidance at kill sites is compensated for by increasing kill rates,” she said.

For this study they looked at the actions of 30 animals that had been captured and later released with GPS monitoring collars. The collars record and transmit not only location and travels but also hunting behavior such as bursts of speed or pounces.

The team found that the greatest impact on pumas was when their hunting territories were within 150 meters of human development. They also found that females have a smaller range than males but higher kill rates. Females killed an average 67 deer per year compared with nearly 44 for males whose ranges are approximately three times as large.