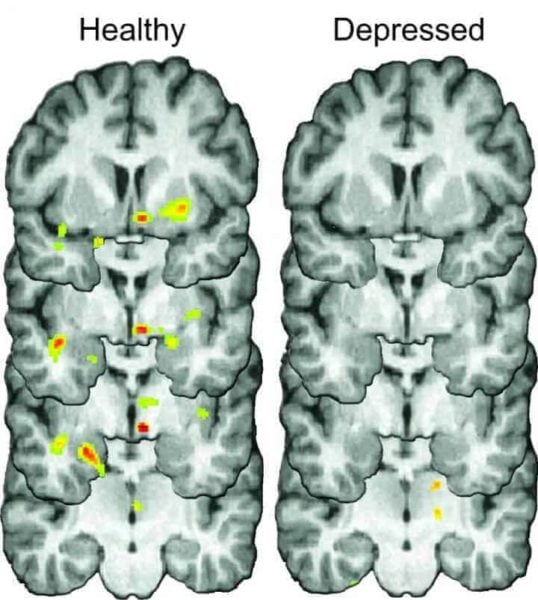 Rejected by a person you like? Just “shake it off” and move on, as music star Taylor Swift says.

But while that might work for many people, it may not be so easy for those with untreated depression, a new brain study finds.

The pain of social rejection lasts longer for them — and their brain cells release less of a natural pain and stress-reducing chemical called natural opioids, researchers report in the journal Molecular Psychiatry.

The findings were made in depressed and non-depressed people using specialized brain-scanning technology and a simulated online dating scenario. The research sheds new light on how the brain’s pain-response mechanism, called the opioid system, differs in people with depression.

On the flip side, when someone they’re interested in likes them back, depressed people do feel relatively better — but only momentarily. This may also be explained by differences in their opioid system compared to non-depressed people, according to the new results.

Further research could lead to a better understanding of how to boost the opioid response in depressed individuals to reduce the exaggerated effect of social stress, and to increase the benefits of positive social interactions.

The researchers focused on the mu-opioid receptor system in the brain – the same system that they have studied for years in relation to response to physical pain. During physical pain, our brains release opioids to dampen pain signals.

The new work shows that this same system is associated with an individual’s ability to withstand social stress – and to positively respond to positive social interactions, says senior author Jon-Kar Zubieta, M.D., Ph.D.

“Social stressors are important factors that precipitate or worsen illnesses such as depression, anxiety and other neuropsychiatric conditions. This study examined mechanisms that are involved in the suppression of those stress responses,” he says. “The findings suggest novel potential targets for medication development that directly or indirectly target these circuits, and biological factors that affect variation between individuals in recovery from this otherwise chronic and disabling illness.” Zubieta is a member of U-M’s Molecular and Behavioral Neuroscience Institute, and the Phil F. Jenkins Research Professor of Depression in the Department of Psychiatry.

The new findings have already prompted the team to plan follow-up studies to test individuals who are more sensitive to social stress and vulnerable to disorders such as social anxiety and depression, and to test ways of boosting the opioid response.

“Of course, everyone responds differently to their social environment,” says Hsu. “To help us understand who is most affected by social stressors, we’re planning to investigate the influence of genes, personality, and the environment on the brain’s ability to release opioids during rejection and acceptance.”

Scanning the brain – and finding surprises

The research used an imaging technique called positron emission tomography, or PET. U-M has a PET scanner devoted to research – and a particle accelerator to make the short-lived radioactive elements that enable PET scans to track specific brain activity. The depressed individuals all met criteria for major depressive disorder, and none was taking medication for the condition.

During the brain scan, participants were informed that the individuals they found attractive and interesting were not interested in them. PET scans made during these moments of rejection showed both the amount and location of opioid release, measured by looking at the availability of mu-opioid receptors on brain cells. The depressed individuals showed reduced opioid release in brain regions regulating stress, mood and motivation.

During social acceptance when participants were informed that people liked them back, both depressed and non-depressed individuals reported feeling happy and accepted. This surprised the researchers, says Hsu, because depression’s symptoms often include a dulled response to positive events that should be enjoyable. However, the positive feeling in depressed individuals disappeared quickly after the period of social acceptance had ended, and may be related to altered opioid responses.

But only non-depressed people went on to report feeling motivated to connect socially with other people. That feeling was accompanied by the release of opioids in a brain area called the nucleus accumbens — a structure involved in reward and positive emotions.

The researchers had actually informed participants ahead of time that the “dating” profiles were not real, and neither was the “rejection” or “acceptance.” Nonetheless, the simulated online dating scenario was enough to cause both an emotional and opioid response. Before the end of the visit, staff gave depressed participants information on treatment resources.

“We enrolled almost all of these subjects in a subsequent treatment study – which allows us to capture additional information about how these opioid changes to acceptance and rejection may relate to success or failure of our standard treatments” says study co-investigator Scott Langenecker, formerly at U-M and now at the University of Illinois at Chicago.

He adds, “We expect work of this type to highlight different subtypes of depression, where distinct brain systems may be affected in different ways, requiring us to measure and target these networks by developing new and innovative treatments.”

2 thoughts on “Shake it off? Not so easy for people with depression”