As a part of our monthly splurge ritual, my boyfriend and I had brunch at a fantastic South Indian restaurant.   Now, to give you a little backstory, I can (really, our parents can) come up with hundreds of differences between the two of us that would make us incompatible: my family is Pakistani, his is South Indian; mine is Muslim while his is Hindu; I’m Texan, he’s Californian, and on and on.  Despite all this, while sitting at that restaurant I couldn’t help but realize how obvious it was that we were of the same people.  The delicious dishes had unfamiliar names but incredibly familiar tastes and the aromas filling the room carried a type of comfort that is hard to explain but easy to understand.  Even the chatter, while not always in a language I explicitly recognized, had a tone that I had heard my entire life.

We stratify ourselves to such great lengths that it is easy to forget that we come to this world with a shared history spanning over 13 billion years.  Our enforced tribalism seems willfully ignorant of the fact that, though our species may rule the roost at the moment, we constitute just 1 of probably 8 billion or so other species that currently occupy this planet. This number is dwarfed by the billions who have come before, and I’m just talking about eukaryotes! Keeping in mind that we are all borne of the same Earth and made of the same stardust, I thought we should get to know some of our more fascinating friends J 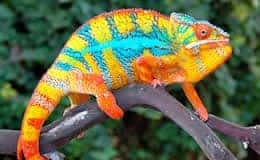 The first species I thought we could learn a bit more about comes from a family of organisms that displays a behavior that may come in handy to even the best of us – Furcifer pardalis, better known as the panther chameleon.  This species of color-changing reptile makes its home to the biodiverse tropics of Madagascar.  However, the scaly creatures can be found throughout the world, as many individuals of the species Homo sapiens care for them outside of their natural environment as pets.  In addition to long tongues and fused toes, probably the most striking biological feature of these lizards is their ability to rapidly change color for the purposes of camouflage, display or perhaps to just reflect their temperament (remember mood rings?)  Indeed, drastic color change observed in a male panther chameleon trying to attract a female (from green to orange) can occur within minutes and is fully reversible, if not always successful.

A recent publication from the lab of Michel Milinikovitch at the Laboratory of Artificial and Natural Evolution (LANE) at the University of Geneva in Switzerland took a closer look at the mechanics that govern color change.  Utilizing electron microscopy coupled with sophisticated photometric videography techniques, they were able to identify two populations of iridiphores (iridescent cells) with differential functions to allow for efficient color changing ability.  The two iridiphore layers each contain guanine crystals that vary in size, shape and organization.  The authors discovered that between a resting and excited state, the guanine crystals of the top layer (S-iridiphores) change in spacing rather than size or shape, allowing for differential reflection of light which appears to us as a change in color.  Further, this top layer is only fully developed in mature, male panther chameleons and less prominent in females and adolescents, consistent with the degree of color change evident in each group.  In contrast, the D-iridiphore, or deeper layer, is present in all panther chameleons and is somewhat less organized than the S-iridiphore layer that sits on top of it.  The authors hypothesize that this layer may play a role in thermal protection – a novel evolutionary adaptation.

This discovery not only reveals insights into the secrets of color change in chameleons, it opens doors for material scientists to generate color changing materials.  Indeed, scientists at the University of Berkeley are toying with this idea and have developed a stretchable silicon film that changes colors due to alterations in the spacing of beams that have been etched into the film.  Think of the possibilities! I can already imagine my new closet full of color changing clothes…