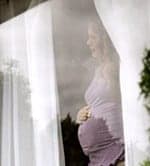 Researchers at the Columbia Center for Children’s Environmental Health (CCCEH) at the Mailman School of Public Health and colleagues at the University of Southern California have found a powerful relationship between prenatal exposure to air pollutants known as PAH (polycyclic aromatic hydrocarbons) and changes in the child’s brain structure and cognitive and behavioral problems. Results appear in the journal JAMA Psychiatry.

PAH are ubiquitous in the environment from emissions from motor vehicles, oil and coal burning for home heating and power generation, tobacco smoke, and other combustion sources. (More on PAH and ways to limit exposure can be found on theCCCEH website.)

The study was conducted in a subset of CCCEH’s ongoing urban birth cohort study in New York City which is following over 600 mothers and children from pregnancy into the children’s adolescent years. For a period during pregnancy, the mothers, all nonsmokers, carried personal backpacks containing filters which provided researchers with a sample of the air that the mothers were breathing. The filters were then analyzed for levels of PAH. The Columbia researchers, led by Frederica Perera, PhD, DrPH, director of CCCEH, with Virginia Rauh, ScD, and colleagues previously reported that prenatal exposure to airborne PAH during gestation was associated with development delay by age 3, reduced verbal IQ at age 5, and symptoms of anxiety and depression at age 7.

At 7 to 9 years of age, Magnetic Resonance Imaging (MRI) scans and behavioral and cognitive tests were completed in 40 children from the cohort, under the direction of Bradley Peterson, MD, and Dr. Rauh. “This is the largest MRI study to date of how air pollutants, specifically PAH, affect the developing mind; our findings suggest that PAH are contributors to ADHD and other behavioral problems due to the pollutants’ disruptive effects on early brain development,” says Dr. Peterson, formerly at Columbia and now director of the Institute for the Developing Mind at Children’s Hospital Los Angeles as well as professor of Pediatrics and Psychiatry at Keck School of Medicine of the University of Southern California.

The researchers documented reductions in nearly the entire white matter surface of the brain’s left hemisphere in children exposed to high levels of PAH—loss they found to be associated with slower processing of information during intelligence testing and more severe behavioral problems, including attention deficit hyperactivity disorder (ADHD) and aggression, in a dose-response fashion. Postnatal PAH exposure—measured at age 5—was found to contribute to additional disturbances in development of white matter in the dorsal prefrontal region of the brain, which is associated with concentration, reasoning, judgment, and problem-solving ability.

Peterson explained that the morphological features associated with ADHD symptoms in this community sample differed from those previously reported in youth with the disorder, suggesting that exposure to high levels of PAH may produce a specific subtype of ADHD.

“Taken together with prior research by ourselves and others, these findings on the impact on brain development of prenatal exposure to these ubiquitous air pollutants have important implications for public health and prevention,” says Dr. Perera.

“MRI analysis is being completed on the entire cohort at ages 8-12 to confirm these results,” says Dr. Rauh, professor of Population and Family Health at the Mailman School. “The potentially irreversible nature of the damage lends some urgency to the findings.”