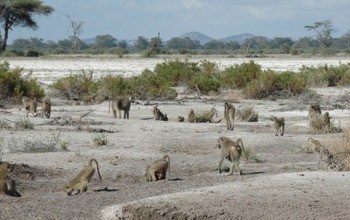 The saying “what doesn’t kill you makes you stronger” may not hold up to scientific scrutiny.

After the plains of southern Kenya experienced a severe drought in 2009 that took a terrible toll on wildlife, researchers looked at how 50 wild baboons coped with the drought, and whether the conditions they faced in infancy played a role.

The semi-arid savanna of southern Kenya usually receives an average of 14 inches of rain a year–akin to much of Nebraska or Kansas–but in 2009 it fell to five inches, less than the Mojave Desert.

The year before wasn’t much better: rainfall in 2008 dropped to half normal levels.

The grasslands the animals depend on for food dried up and watering holes disappeared, leaving many animals starving or weak from hunger.

Most baboons made it, but the drought left them underweight and many females stopped ovulating.

Born in a drought

All females in the study were adults by time of the 2009 drought, but those born in lean times fared worse in 2009 than those born in times of plenty, the researchers found.

“This study demonstrates lifetime fertility reductions for baboons born during stressful conditions or to low-ranking mothers,” said George Gilchrist, program director in the National Science Foundation’s (NSF) Division of Environmental Biology, which funded the research along with NSF’s Divisions of Integrative Organismal Systems and Behavioral and Cognitive Sciences.

“These ‘disadvantaged’ early life experiences are linked with less resilience to stressful conditions experienced as adults.”

Drought babies born to higher-status mothers were less affected by the 2009 event.

“It might be that baboons born to higher-ranked moms have better access to food, or suffer lower levels of social stress,” Alberts said.

The findings also help explain why people who are malnourished in early childhood go on to have higher rates of obesity, diabetes and heart disease as adults.

Some researchers argue that human babies conceived or born in lean times are programmed for food shortages later in life.

They develop a “thrifty metabolism,” aimed at storing fat and conserving energy in order to survive starvation.

Things go awry, the thinking goes, only when the environments they experienced as infants and as adults don’t match, such as when a child conceived in famine grows up and eats an excess of cheeseburgers, said paper co-author Amanda Lea, a biologist at Duke.

But the baboon fertility study lends support to another idea, namely that kids who don’t get enough to eat during their first year of life are simply less resilient as adults than their counterparts.

“It’s bad to be born in bad times, but with the right social or economic environment, that can be mitigated,” Alberts added.

Jeanne Altmann of Princeton University is also a co-author of the paper.

In addition to NSF, the National Institute on Aging in Bethesda, Md.; Duke University; Princeton University; and the Max Planck Institute for Demographic Research supported the research.