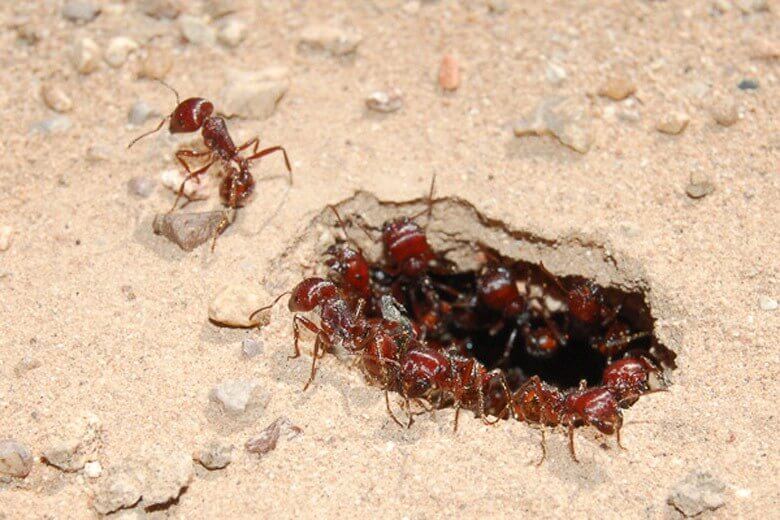 Deborah M. Gordon, a biology professor at Stanford, has worked with a computer scientist, Fernando Esponda, and produced a model that suggests that ant colony defense behavior follows the same distributed network rules as the human immune system. The work suggests that evolution has twice produced a simple security protocol for social insects that, installed in email servers, could make them far more difficult for spammers to hack.

The results are published in the journal The Royal Society Proceedings B.

Immune cells in vertebrate animals use specialized surface molecules to recognize pathogens. These molecules are incredibly specific, usually corresponding only to one or two bacterium or virus strains.

It would be terribly unwieldy for the cell to carry a molecule that matches every existing pathogen, so immune cells typically hunt only one type of intruder. It’s fine if a bug gets past one immune cell – the system knows it will inevitably spot the intruder. This approach is known as a distributed decision network.

Ants, it turns out, use a similar strategy to keep intruders from their nest, Gordon and coauthor Esponda, a computer scientist at the Instituto Tecnologico Autonomo de Mexico, write in their new paper.

Each ant has its own boundary between the scent of friends and foes, Gordon said. As they go through life, they first meet mostly ants that are nest-mates, and decide that they smell like friends. As they grow older, and head outside to forage, they are more likely to meet a foe. If the foe acts unfriendly, or attacks, its scent is classified as that of a foe. Later, when they encounter a friendly scent, they allow that ant to pass, but meeting a foe, the scent of that foe triggers an attack.

As with immune cells, individual ants have a limited capacity for storing this information. In the new model, Gordon and Esponda show that the safety of the colony relies on the ants’ overlapping collective knowledge.

“No one ant knows every foreigner, but because each ant knows a few foreigners, the whole colony knows how to keep foreigners out most of time,” Gordon said. “It’s not perfect, but it’s a lot cheaper.”

Ants are an excellent system for studying distributed decision networks, Gordon said. It is fairly easy to manipulate the identifying chemical markers on their bodies– and thus influence their interactions – and to then track their resulting behavior changes.

As with Gordon’s previous research, in which she and Stanford colleague Balaji Prabhakar, a professor of computer science and electrical engineering, showed that the algorithm ants use to decide when to forage for food mirrors the protocols that control Internet traffic – dubbed the “anternet” – the current work has surprising tech applications.

To block spam messages, email services currently attempt to maintain a master list of “good/bad” email senders. But that list changes constantly, and is relatively easy to hack. Breaking up that list, and developing a way to share the detection of new threats, could pave the way to improved spam filters.

“It’s an arms race,” Gordon said. “But a distributed decision network, similar to how ants and immune cells operate, might be a better defense against hackers, because they can’t simply penetrate the central system’s code.”

The work could also affect more traditional ant research, Gordon said. Historically, when ants from different colonies don’t always fight each other in experiments, scientists have chalked this up to uncooperative ants or decided that something had gone wrong with the experiment, and thrown it away as “noisy” data. Instead, Gordon said, these ants might simply not overlap each other’s decision networks, and this outcome might illustrate a fundamental process of social insects.