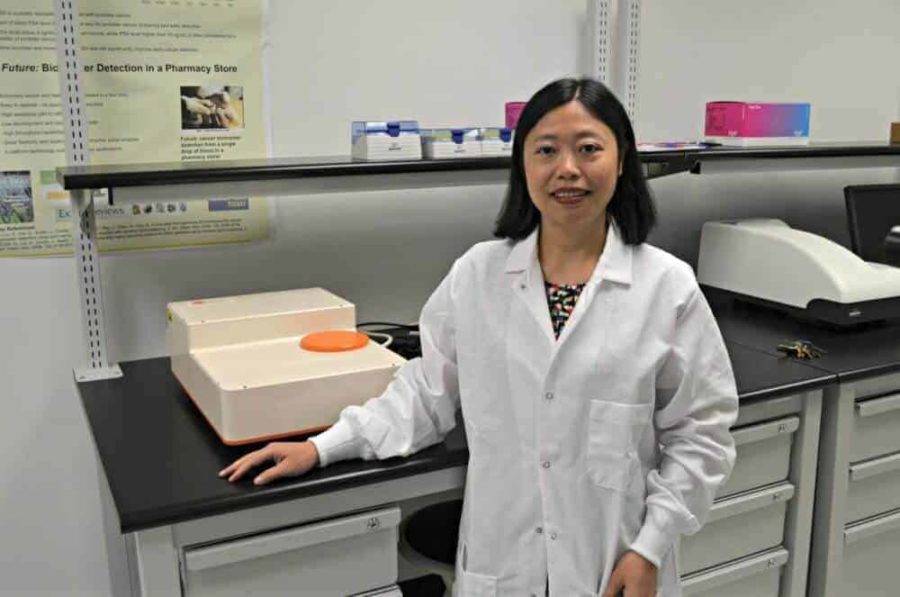 A test that costs less than a $1 and yields results in minutes has been shown in newly published studies to be more sensitive and more exact than the current standard test for early-stage prostate cancer.

The simple test developed by University of Central Florida scientist Qun “Treen” Huo holds the promise of earlier detection of one of the deadliest cancers among men. It would also reduce the number of unnecessary and invasive biopsies stemming from the less precise PSA test that’s now used.

“It’s fantastic,” said Dr. Inoel Rivera, a urologic oncologist at Florida Hospital Cancer Institute, which collaborated with Huo on the recent pilot studies. “It’s a simple test. It’s much better than the test we have right now, which is the PSA, and it’s cost-effective.”

When a cancerous tumor begins to develop, the body mobilizes to produce antibodies. Huo’s test detects that immune response using gold nanoparticles about 10,000 times smaller than a freckle.

When a few drops of blood serum from a finger prick are mixed with the gold nanoparticles, certain cancer biomarkers cling to the surface of the tiny particles, increasing their size and causing them to clump together.

Among researchers, gold nanoparticles are known for their extraordinary efficiency at absorbing and scattering light. Huo and her team at UCF’s NanoScience Technology Center developed a technique known as nanoparticle-enabled dynamic light scattering assay (NanoDLSay) to measure the size of the particles by analyzing the light they throw off. That size reveals whether a patient has prostate cancer and how advanced it may be.

And although it uses gold, the test is cheap. A small bottle of nanoparticles suspended in water costs about $250, and contains enough for about 2,500 tests.

“What’s different and unique about our technique is it’s a very simple process, and the material required for the test is less than $1,” Huo said. “And because it’s low-cost, we’re hoping most people can have this test in their doctor’s office. If we can catch this cancer in its early stages, the impact is going to be big.”

After lung cancer, prostate cancer is the second-leading killer cancer among men, with more than 240,000 new diagnoses and 28,000 deaths every year. The most commonly used screening tool is the PSA, but it produces so many false-positive results – leading to painful biopsies and extreme treatments – that one of its discoverers recently called it “hardly more effective than a coin toss.”

The results of the pilot studies were published earlier this month in ACS Applied Materials & Interfaces. Huo is also scheduled to present her findings in June at the TechConnect World Innovation Summit & Expo in suburban Washington, D.C.

Huo’s team is pursuing more extensive clinical validation studies with Florida Hospital and others, including the VA Medical Center Orlando. She hopes to complete major clinical trials and see the test being used by physicians in two to three years.

Huo also is researching her technique’s effectiveness as a screening tool for other tumors.

“Potentially, we could have a universal screening test for cancer,” she said. “Our vision is to develop an array of blood tests for early detection and diagnosis of all major cancer types, and these blood tests are all based on the same technique and same procedure.”