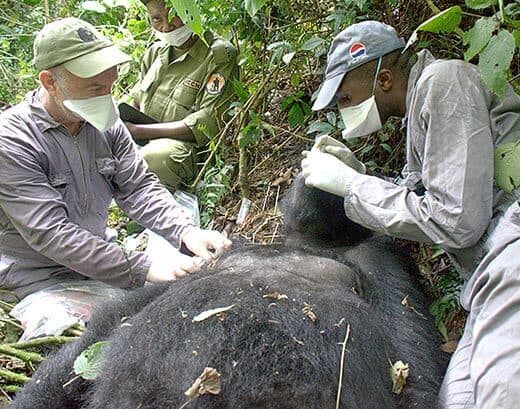 The first project to sequence whole genomes from mountain gorillas reveals that many harmful genetic variations have been removed from the population through inbreeding, that mountain gorillas are genetically adapting to surviving in small populations, and that they have survived in small numbers for thousands of years.

The study, published today in the journal Science, was by a research team led by Wellcome Trust Sanger Institute and including the University of California, Davis. The project has given scientists and conservationists new insight into the impact of population decline on these critically endangered apes, and provides clues as to how apes and humans — their closely related cousins — adapt genetically to living in small populations.

“It is a small population, and there is inbreeding, but the study reveals some of the inbreeding was positive and got rid of a number of the deleterious genes,” said co-author Mike Cranfield, co-director of Gorilla Doctors, a partnership between the UC Davis Wildlife Health Center and the nonprofit Mountain Gorilla Veterinary Project.

Mountain gorillas on the rise

The number of mountain gorillas living in the Virunga volcanic mountain range on the borders of Rwanda, Uganda and the Democratic Republic of Congo plummeted to approximately 253 in 1981 as a result of habitat destruction and hunting. Since then, conservation efforts have bolstered numbers to approximately 480 among the Virunga population. (Their total world population is around 880 individuals.)

The Gorilla Doctors, whose veterinarians treat wild mountain gorillas injured by snares, provided blood samples for the study in collaboration with the Rwanda Development Board and The Institut Congolais pour la Conservation de la Nature. This enabled researchers to sequence the whole genomes of seven mountain gorillas for the first time.

Previously, only easily obtainable but poor-quality DNA from fecal and hair samples have been analyzed at a handful of genetic loci. Scientists can now see that these mountain gorillas, along with eastern lowland gorillas, their closely related neighbors, were two to three times less genetically diverse than gorillas from larger groups in western regions of central Africa.

While there are concerns that this low level of genetic diversity may make the mountain gorillas more vulnerable to environmental change and to disease, including cross-infectious strains of human viruses, the researchers were surprised to find that inbreeding has, in some ways, been genetically beneficial. Fewer harmful loss-of-function variants were found in the mountain gorilla population than in the more numerous western gorilla populations. These variants stop genes from working and can cause serious, often fatal, health conditions.

‘Mountain gorillas may be more resilient’

By analyzing the variations in each genome, researchers also discovered that mountain gorillas have survived in small numbers for thousands of years. Researchers were able to determine how the size of the population has changed over the past million years. According to their calculations, the average population of mountain gorillas has numbered in the hundreds for many thousands of years; far longer than previously thought.

“We worried that the dramatic decline in the 1980s would be catastrophic for mountain gorillas in the long term, but our genetic analyses suggest that gorillas have been coping with small population sizes for thousands of years,” said Yali Xue, first author from the Sanger Institute. “While comparable levels of inbreeding contributed to the extinction of our relatives the Neanderthals, mountain gorillas may be more resilient. There is no reason why they should not flourish for thousands of years to come.”

No time to rest

While the genome analysis gives cause for optimism, mountain gorillas are still vulnerable.

“The population now is robust and growing,” Cranfield said. “However if you think of 880 individuals as all that’s left in the world, that’s still a very tiny population. It would only take a big natural disaster or disease outbreak to lower those numbers significantly. So although this is a good-news story, I don’t think we want to rest on our laurels.”

Scientists hope the detailed, whole-genome sequence data gathered through this research will aid conservation efforts. Now that a genome-wide map of genetic differences between populations is available, it will be possible to identify the origins of gorillas that have been illegally captured or killed. This will enable more gorillas to be returned to the wild and make it easier to bring prosecutions against those who poach gorillas for souvenirs and bush meat.

Conservation efforts to protect mountain gorilla conservation have been led by the Rwanda Development Board, The Ugandan Wildlife Authority, The Institut Congolais pour la Conservation de la Nature, organizations like the Gorilla Doctors, and supported by tourists keen to see the gorillas made famous by primatologist Dian Fossey.