Researchers in ageing knew for some time that the amino acid methionine plays an important part in protein synthesis, and that reducing it from the diet has several anti-ageing benefits. Evidence suggests that a substantial benefit of calorie restriction diets may, in fact, be due to the limited amount of methionine in the diet. Evidence also points to the fact that restricting methionine consumption increases lifespans in some types of animals in the laboratory such as mice, even without calorie restriction.

A very good summary of this subject, although a bit old, can be found in the blog of Josh Mitteldorf here. In this article I will briefly highlight some recent developments from research published in the past two or three months.

Restricting methionine from the diet results in a decreased production of reactive oxygen species (free radicals) in the mitochondria. It also decreases other non-oxidative stress on mitochondrial proteins. In a study, methionine restriction resulted in increased secretion of hormones protecting the heart muscles, and improved the function of adiponectin (that helps fight obesity) and fibroblast growth factor. 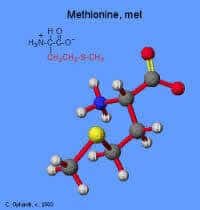 Recently, further research confirms that methionine restriction has several anti-proliferative benefits and it may thus be of some use against tumours. Depletion of methionine induces apoptosis through activation of TRAIL (TNF-Related Apoptosis-Inducing Ligand receptor-2) which results in an increased rate of elimination of cancer cells. The authors suggest that combining methionine restriction diets with other specific TRAIL activators may be a suitable method to reduce growth of certain cancers. This is a promising strategy but it needs to be evaluated further.

On the other side if the coin, it is also known that adding methionine to the diet (at least in fruit flies) shortens lifespan. High levels of methionine increase production of free radicals and worsen antioxidant defences.

In humans, a vegan diet is believed to be the nearest we can come to a methionine restricted diet. This is because plant nutrients are naturally low in methionine. Nutritionists point out however that it would not be wise to completely eliminate methionine from the diet as this may result in blood and liver abnormalities.

The issue of methionine restriction is complicated by the fact that some forms of methionine such as S-adenosyl-methionine (SAMe) are actually beneficial in ageing, and help control depression. However, it must be pointed out that SAMe, is not pure methionine but it is a combination of methionine and adenosine triphosphate (ATP), which make it useful in several metabolic pathways. This indicates a widespread principle in nature, namely that although a compound may be damaging on its own, it may be beneficial if combined with something else, and also that the dose and concentration of a compound may be damaging at one level and beneficial at another.

2 thoughts on “Methionine restriction as an anti-ageing strategy”