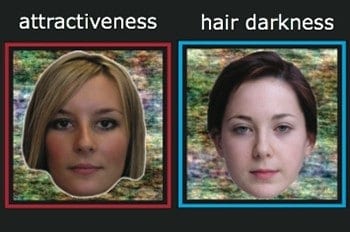 Beauty, it has been said, is in the eye of the beholder. People’s opinions on what constitutes an attractive face changes over time and from place to place. A new study by researchers at Penn’s Center for Cognitive Neuroscience gives a clearer view of just what drives such shifts: People actually begin to see faces differently depending on the context.

Previous studies have come up with contradictory answers for context’s role. In some, seeing a particularly attractive face seems to make nearby faces more attractive; in others, it seems to have the opposite effect. Getting to the actual mechanisms is complicated.

“Our brains are always adapting to the context around us, but multiple things are adapting at once,” says Teresa Pegors, a postdoctoral fellow in the Annenberg School of Communication, who led the study while a graduate student in the lab of Russell Epstein, a professor of psychology in the School of Arts & Sciences.

To study this adaptation, the Penn team asked people to rate the attractiveness of faces on a screen. The idea was to investigate whether context makes some facial features, which might stand out in other contexts, recede into the perceptual background. Such perceptual biases have been observed when people rate ostensibly objective qualities, such as brightness and loudness.

“Our goal with this study was to investigate whether a similar perceptual bias exists for face attractiveness,” says Marcelo Gomes Mattar, a psychology graduate student and co-author of the study. “Contextual effects can affect either the way you actually see a face, or only the way you rate it. We wanted to find out which one was happening for attractiveness.”

To tease apart these effects, the Penn team picked a facial trait that a preliminary experiment found to be unrelated to overall attractiveness: hair darkness.

After one group of participants rated a series of female faces for both of those traits, another group was shown a sequence of those faces and was asked to rate the first face they saw on attractiveness, the second on the darkness of its hair, and so on. Each face was shown for either a short or long period of time.

“Their responses are being pulled in two different directions at once,” Pegors says, “towards the previous number but away from what they just saw.”

The results clarify the seemingly contradictory findings of earlier research in this area. They can also help explain the power of media representation to influence people’s perception of beauty by saturating our collective context with a particular set of features.

“More broadly, these results show how the sensations and evaluations of any one moment are shaped by recent history. No single percept stands alone,” says Epstein.

Peter Bryan, an undergraduate cognitive science major, was also a co-author on the study, which was published in the Journal of Experimental Psychology: General.