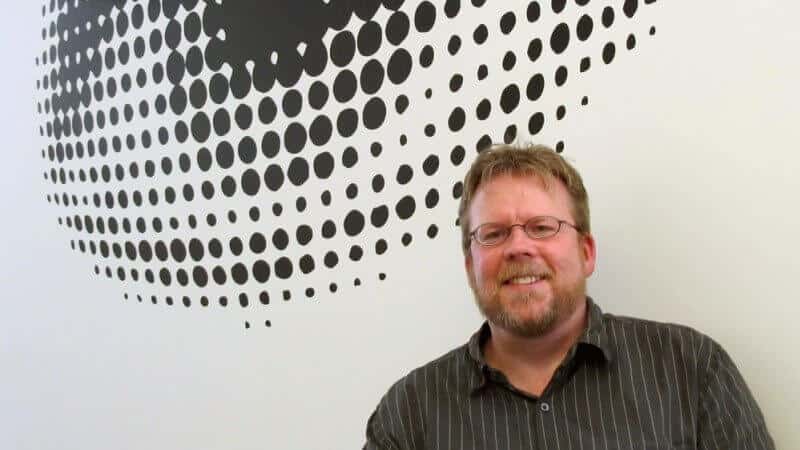 Two wrongs can make a right, at least in the world of visual perception and motor functioning, according to two University of Oregon brain scientists.

In a two-experiment study, published last month in the journal Frontiers in Human Neuroscience, UO neuroscientists Paul Dassonville and Scott A. Reed used eye-tracker technology in a dark laboratory to test a developing theory about how the brain determines the locations of nearby objects.

In a test of perception, 20 students were asked to report whether a line was tilted left or right of vertical. Their performance in this simple task became skewed, however, when the line was shown within a tilted frame. A left-leaning frame caused the line to appear tilted to the right, and vice versa.

In spite of this well-known visual illusion, when subjects were asked to look at the end of the line they had no trouble making accurate eye movements, demonstrating an apparent difference in the way that perception and actions respond to the illusion.

Similar demonstrations have led other researchers to suggest that the brain forms two maps of space — an illusion-prone map for creating conscious perception of the world, and an illusion-resistant map used for guiding movements.

Results of the new experiments showed that accurate eye movements to the end of the line prove to be the exception, rather than the rule. When subjects were instead asked to make simple vertical eye movements, for example, those movements were affected by the tilted frame just as visual perception had been.

“In the lab, we explore the kinds of assumptions the brain makes about the world around us,” said Dassonville, professor of psychology and member of the Institute of Neuroscience. In the real world, he said, judgments about an object’s orientation are aided by visual clues that help anchor the perception of vertical, such as the view of a doorframe, a window frame or where two walls meet. In the laboratory, these cues were replaced by misleading cues of the tilted frame, resulting in the illusion.

“The tilted frame distorts our perception of vertical just as our sense of direction would be distorted by a compass that incorrectly points west instead of north. If you try to walk north using a broken compass, you’ll head off in the wrong direction,” said Dassonville. “The perceptual illusion caused by our tilted frame is analogous to a treasure map that is created using the faulty compass. The map is technically incorrect, but as long as you use the combination of the faulty map and the faulty compass to navigate around, you’ll be able to accurately find the treasure once again. The errors cancel out.”

In the experimental task, the cancellation of errors allowed the subjects to make accurate movements to the end of the line in spite of the illusion.

These new conclusions challenge the model of visual function that suggests that conscious perception of an object’s location is formed in a wholly different part of the brain than that used for guiding actions, says co-author Scott A. Reed, an adjunct instructor in the Department of Psychology.

“We agree there are separate pathways in the brain for different aspects of visual function,” Dassonville said, “but it’s not the case that one is only about perception and the other is only about action.”

“What we found in our study,” Reed said, “is that the brain relies on a shared representation of space that is used to both make perceptual judgments about the world and to guide behavior.”