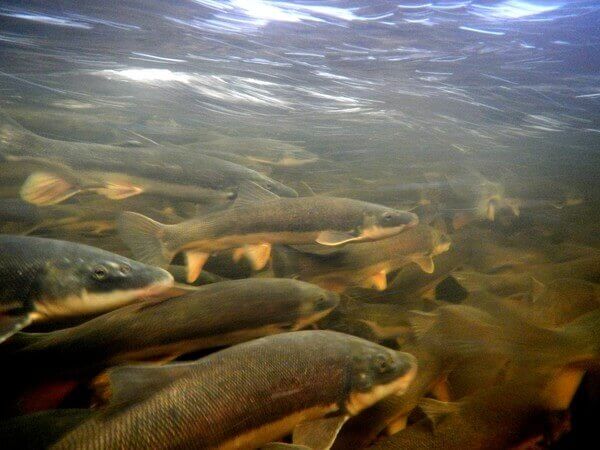 A few years ago, researchers at the University of Wisconsin-Madison Center for Limnology created the first map of all the road crossings and dams blocking the tributary rivers that feed the five Great Lakes. These tributaries serve as migratory highways, providing fish like walleye and lake sturgeon access to headwater breeding grounds.

“It painted a pretty horrifying picture of what it’s like to be a fish in the Great Lakes Basin,” says Peter McIntyre, an assistant professor in the center, who led that study. “Seven out of eight river miles are completely inaccessible to the fish.”

A new study from the same multidisciplinary team, published April 27 in the Proceedings of the National Academy of Sciences, describes a powerful new model to help decision makers maximize the cost-effectiveness of barrier removal projects that also restore migratory fish habitat. Recent years have seen growing efforts to chip away at the 7,000 dams and 230,000 road crossings that disrupt the basin’s 661 tributaries.

Notes Tom Neeson, a postdoctoral researcher at CFL and lead author of the study, “If you’re going to spend money on barrier removal projects, isn’t it critical to know which projects are going to give you the biggest bang for your buck?”

For example, a $70 million investment to remove 299 dams and 180 road crossings — coordinated across the entire Great Lakes Basin — could double the amount of habitat accessible to migratory fish, the model finds. That is roughly the amount spent for such projects over the last decade, but until now decision makers have lacked tools for systematically comparing potential projects, the researchers say.

“The bottom line is, you don’t have to spend that much money to get a massive return in terms of the amount of habitat accessible for fish,” says McIntyre.

As the model matures, its creators say it could ultimately be used to reduce risk of species invasions, plan around aging infrastructure, and account for ongoing climate changes.

The research team recently used the model to launch a free, online tool, called Fishwerks, to help select barrier removal projects that open more fish habitat at lower cost. The team includes Michael Ferris, a UW-Madison professor of computer sciences and optimization leader at the Wisconsin Institute for Discovery (WID); Matthew Diebel of the Wisconsin Department of Natural Resources (DNR); Patrick Doran at The Nature Conservancy (TNC); and Jesse O’Hanley at the University of Kent.

“This is one of the pieces I am most excited about,” says Diebel, a research scientist at the DNR who completed his postdoctoral research at CFL. “A lot of tools don’t get used because they can’t be accessed by decision makers.”

Overall, the study examined the value of efforts coordinated both in time and in space to open more riverine highways for migrating fish, which contribute to a $7 billion annual recreational fishing industry in the Great Lakes Basin, which spans the U.S.-Canadian border.

Marrying high-quality data with high-power computing, the researchers found that for a given amount of money, barrier removal projects coordinated across the entire basin are nine times more cost-effective than projects completed at county or local watershed levels.

For example, the doubling of habitat achieved through a coordinated $70 million investment would cost $690 million if funding was distributed equally across all tributaries. Coordination at national or even individual lake levels was virtually as efficient as efforts coordinated throughout the Great Lakes.

“It works fine for decisions about Lake Michigan and Lake Superior to be fairly independent of one another,” says McIntyre. “But as soon as you get below that level of coordination — to the county or watershed scale where a lot of decisions are made — the funding gets spread too thinly, and the model shows you’re going to underperform drastically.”

The study also showed that annual distribution of funds over a decade is 10 times less efficient than a single payout of the same amount.

McIntyre illustrates this with an example: “You can give a fishery manager a chunk of funding from a major restoration initiative, but if in year one she can’t afford to tackle the dam at the mouth of the river, then what good is it to upgrade an affordable road crossing upstream when all the fish are still bumping their noses against the dam?”

While coordinating projects can present challenges, it is not unprecedented in this region, where diverse partnerships under the Great Lakes Water Quality Agreement and the Great Lakes Fishery Commission have been very successful, the researchers say. Major restoration efforts have also been coordinated under the Obama administration’s Great Lakes Restoration Initiative, which has provided almost $1.4 billion since 2010.

Efforts need not be top-down, either, Neeson says. For example, individual watershed groups can use the same modeling tools to meet their own objectives while contributing to ecological improvements for the entire lake.

That could mean some groups decide not to spend funds for their own projects, in favor of projects elsewhere that may lead to greater benefits overall.

For example, conservation groups in one watershed may decide that sending their funds to another nearby watershed to remove a critical barrier may actually be the wisest investment, explains McIntyre.

“It’s a trade-off between efficiency and equity, where you’re distributing funds so everyone has a piece of the pie,” says Diebel. “We have to be willing to say we’re not going to work on this issue in my backyard because there is a better-value option elsewhere.”

Additionally, Neeson says the model could be used to help combine distinct types of efforts to save money, such as merging fish needs with infrastructure priorities.

“If you can get conservation folks talking to the Department of Transportation folks, there may be opportunities to do fish passage projects during road maintenance projects and piggy-back conservation and construction at lower net cost,” he says.

Doran, director of conservation for TNC-Michigan Chapter, says their work demonstrates “the immense value of collaboration in conducting these restoration efforts,” while also highlighting the importance of restoring river connectivity in the region.

The team walked through a scenario on Fishwerks, the development of which was supported by the U.S. Fish and Wildlife Service. The site is hosted on WID servers and the interface is a Google Earth-style map, labeled with dams and road crossings, while filters and menu options allow for customized tasks.

“You can zoom in and out, compare different scenarios, look at this budget versus that budget or this lake versus that lake,” McIntrye said as he navigated the site. “The information is now in the hands of anyone who wants to use it.”

The researchers say the model will continue to improve with more data, which in turn will amplify the power of Fishwerks. Ferris notes the tool currently supports a crowdsourcing feature they call the “Wild West” where authenticated users can contribute their own data, helping to refine the database available to all users.

“The models we run tomorrow will be better because they will be educated by better data,” he says. “Can we extend this model to more complex cases? Can we move forward to help with the more pressing issues the scientists don’t know how to deal with or need new ideas to address?”

For example, while barriers have kept migratory fish from reaching ideal spawning grounds, many have also kept out invasive species and pathogens.

“This paper is step one,” says Ferris. “Our new work is about good fish and bad fish now. We want the good fish to get to the places they need so they can breed, but we also want to limit the bad fish.”

The study was supported by the Upper Midwest and Great Lakes Landscape Conservation Cooperative, U.S. Fish and Wildlife Service, The Nature Conservancy, University of Michigan Water Center, Erb Family Foundation, Packard Foundation, and the University of Wisconsin. Other members of the research team include WID programmers Jeff Dischler and Steve Wangen, and CFL post-doc Allison Moody.