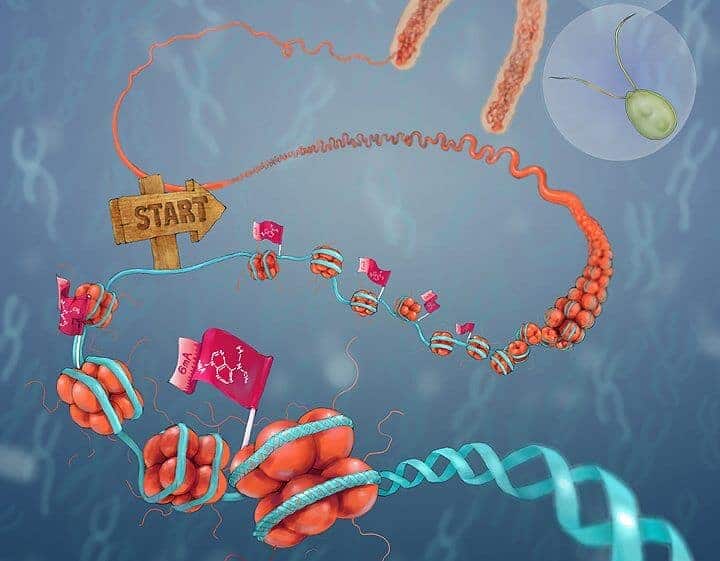 Scientists at the University of Chicago, Harvard University and the Chinese Academy of Sciences have described the surprising discovery and function of a new DNA modification in insects, worms and algae.

Common DNA modifications occur through methylation, a chemical process that can dramatically change gene expression, which regulates the eventual production of proteins that carry out the functions of an organism. It’s all part of a growing new subfield of epigenetics being pioneered by Professor Chuan He and his collaborators.

Through epigenetics, organisms sometimes bypass the genetic code to transmit certain traits to their offspring. DNA modifications, without changing DNA sequence, carry out those transmissions.

“The human genome is not static. It contains dynamic DNA modifications that carry key inheritable epigenetic information passed among generations of cells,” said He, the John T. Wilson Distinguished Service Professor in Chemistry and a Howard Hughes Medical Institute Investigator.

Now, teams from UChicago, Harvard and in China have identified an adenine DNA methylation that also epigenetically regulates cellular function in green algae, worms and flies. Their three papers were published online April 30 in the journal Cell. He’s research group contributed to all three Cellpapers, which report the presence and function of N6-methyladenine (6mA) in the three organisms.

“The conservation of this modification from simple unicellular eukaryotes to vastly different worms and flies indicates its wide presence and functional roles,” He said. “All three studies together uncover a potential new epigenetic mark on eukaryotic DNA. They open a new field of biology and chemical biology.”

Worms and flies were not previously known to contain DNA methylations. The presence of 6mA in green algae (Chlamydomonas) has been known for more than 30 years, He said, but the phenomenon went largely unexplored. “No one had any idea what it does inside green algae.”

In one of the Cell papers, He and 13 co-authors, including Laurens Mets, associate professor in molecular genetics and cell biology at UChicago, unveiled the function of 6mA in Chlamydomonas, a green algae of potential use in biofuel production.

“Genes that have methylated cytosine have been associated with reduced gene expression,” said Mets, who counts Chlamydomonas among his research specialties. “What’s different about adenine methylation is that it is associated with more strongly expressed genes. It’s a missing piece in the puzzle of regulation at the DNA modification level, and that’s an exciting thing.”

In 2011, He’s group opened the new research field of RNA epigenetics. That year his group reported that the FTO protein, which is associated with obesity, can remove 6mA from the messenger RNA of mammalian cells. In subsequent research, He’s group discovered and described the writer, eraser and reader proteins of methylated RNA. Additional studies conducted by researchers globally also have shown the functional significance of RNA methylation in many aspects of biology, including stem cell differentiation and development. The same base modification on DNA is the subject of the current studies reported in the three Cell papers.

For the Cell study, He’s group turned its attention to DNA methylation in green algae. The lead authors of that study were Ye Fu, PhD’12, now a Harvard postdoctoral fellow; and Guan-Zheng Luo, a postdoctoral scholar at UChicago.

“What Ye Fu and Guan-Zheng Luo were able to do is to determine very precisely where the methylated bases are in the genome,” Mets explained. “That revealed a whole new set of findings that are also really exciting.”

Among these findings, Fu and Luo found a sharply periodic pattern of adenine methylation that corresponds to the main structural feature in the nucleus of eukaryotic cells. This structural feature is a protein complex called a nucleosome. Nucleosomes generally can be found anywhere along the length of DNA except in highly expressed genes. In the latter situation, nucleosomes display a precisely spaced pattern. Factors that define the precise positioning of nucleosomes have been mysterious for a long time. The new finding provides a new perspective to answer this question.

Mets said he would like to investigate methylated adenine further to determine its evolutionary origins. “I’m interested in exploring how universal this mechanism might be by looking at a wide range of organisms,” Mets said.

He, meanwhile, plans further studies of 6mA in the DNA in higher eukaryotes such as mammals.