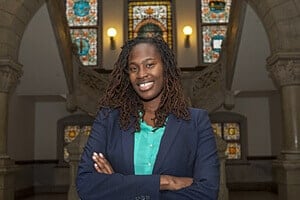 A novel investigation into the marketing of Christian music suggests that the power of music could be contributing to the powerful racial divide that remains in the nation’s Christian churches.

In their paper, “Behind the Music: Exploring Audiences’ Attitudes toward Gospel and Contemporary Christian Music,” the authors connect race and Christian music as well as the music’s influence on listeners’ racial ideologies. The authors emphasize that while a number of previous studies have linked popular music with personal identity, comparative studies of Christian music genres are lacking.

In this pioneering area of research, they found that out of their focus group discussions with college-age participants, listeners of gospel music appeared to be more open or curious about contemporary Christian music while believing it was played in churches with audiences of more privileged backgrounds. They also discovered that, “While contemporary Christian music listeners identified gospel music as soulful, raw and real, the manner in which some of them discussed the music was disapproving. They expressed their inability to identify with the music with no clear reason except that they found the music to be less composing and more performative,” write the authors.

The study also revealed that black participants had a disconnection with contemporary Christian music because they didn’t find it emotionally moving. “These judgments have some implications for blacks’ attitudes toward whites as emotionless or dull,” state the authors. “However, in accordance with cross-cultural adaptation and assimilation theories, the majority of gospel listeners were more open to contemporary Christian music.”

The study involved 40 college students. The study was divided by and focused only on listeners who self-identified as black listeners of gospel music or white listeners of contemporary Christian music.

The authors explain that they made this decision because of the clear classification of the genres and audiences targeted by the music industry. Only students who identified as Christian participated in the study, because the authors say they would have a stronger relationship to the music than non-Christian participants.

The study applied social identity theory, commonly used in psychology, to examine how black listeners of gospel music and white listeners of contemporary Christian music evaluate themselves and one another. “We argue that religious music, Christian music in particular, carries messages about racial identity that have implications for listeners’ attitudes toward their in-group and out-group members. More specifically, this study examines the relationship between listeners’ identification with the in-group genre and their attitudes associated with the out group,” write the authors.

College student attitudes were studied because the college-age population is part of the target market for contemporary or alternative forms of Christian music. The group was represented by 31 women and nine men, and was evenly divided by race. They were part of focus groups held at a large Midwestern public university and a small private university in the northwest. The groups were led by moderators who had undergone training to avoid racially categorizing the music. The study involved four group interviews held at each institution.

Themes emerging from the contemporary Christian listeners did reveal some criticism of the genre as being commercial, but overall being uplifting, encouraging and worshipful. The study also found that the group indicated a level of discomfort or misunderstanding of gospel. The researchers say stereotypes of the black church arose in the discussions around gospel music and choirs, animation and noisiness. “Generally, white respondents seemed to judge gospel music as disconnected from contemporary culture,” state the authors.

“While most (gospel) participants were open or curious about contemporary Christian music, there was also a level of disconnection or lack of exposure,” add the authors. “However, this disconnect did not manifest as judgment about the value of the genre; rather, it expressed an inability to connect.”

“This research suggests that when focusing specifically on the purpose of the music in both genres, there is a spiritual connection that acknowledges a shared faith where both black and white Christians worship the same God and embrace the same belief system,” state the authors. “However, the findings of this study challenge the popular aphorism that ‘music has no color.’ While in theory this might be the case, unfortunately, the everydayness of life, those things that we experience as human beings are getting in the way, muddying the water and drawing distinctions between God-inspired music targeting black audiences and music targeting white audiences. Even in Christian environments, these distinctions influence the way we engage with one another across racial lines and hinder our ability to move toward racial reconciliation.”

The authors say the study demonstrates that Christian music can confirm racial ideologies held by Christian listeners regardless of race. “An implication of this study is that collaborative efforts of artists from both contemporary Christian music and gospel could de-racialize and therefore de-stigmatize each genre,” conclude the authors.

The authors suggest future research should focus on culturally diverse audiences of both music genres to examine how listeners choose their music in relation to race and identity.

Funding for the study was supported by a diversity grant awarded by the Provost’s Committee on Faculty Diversity, Diversity Award.

1 thought on “Sounds of Praise or Tones of Racism? A Look at the Marketing of Christian Music”