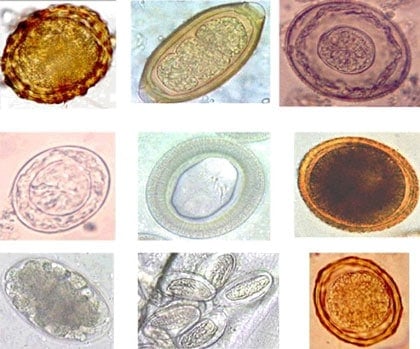 A Duke University study in rats finds that gut worms can protect babies’ brains from long-term learning and memory problems caused by bacterial infections in newborns.

Baby rats with tapeworms avoided the brain inflammation that plagued worm-free rats after exposure to immune triggers in adulthood.

What’s more, the benefits began early, while still in the womb. Expectant mother rats with tapeworms passed similar protection on to their worm-free pups, the researchers found.

The findings could point to new ways to treat or prevent the chronic brain inflammation linked to cognitive disorders like Alzheimer’s disease, autism and depression.

The study appears online in the journal Brain, Behavior, and Immunity.

Previous studies by Duke neuroscientist Staci Bilbo and colleagues showed that when rats get bacterial infections at a very early age, even elsewhere in the body, immune cells in their brains become hypersensitive to subsequent infections and pump out a continuous stream of messenger molecules called cytokines that can cause cognitive problems later in life.

But for Bilbo, who is an associate professor of psychology and neuroscience and a member of the Duke Institute for Brain Sciences, something didn’t quite add up. Given how frequently bacterial infections strike, it was still unclear why a single infection at the wrong time would send the brain’s immune cells into permanent overdrive.

“We have faced bacterial infections throughout our entire evolutionary history, presumably also during the neonatal period,” Bilbo said. “It always seemed kind of strange that the immune system would have evolved to overreact like that.”

That got Bilbo thinking. “Maybe this isn’t how the immune system evolved to work,” she said.

According to what scientists call the “Biome Depletion Theory,” some autoimmune and inflammation-related diseases may be the result of too few of the life forms that once lived in and on the body — particularly gut worms — rather than too many.

Tapeworms, roundworms and other wormy companions have inhabited the warm wet folds of animal intestines for more than 100 million years, bathing in a constant supply of food and nutrients.

Over millions of years of co-existence, the theory goes, the immune system learned to tolerate these live-in guests, and eventually adapted to work with worms in mind.

The theory is that now, with worms gone from our guts, the body’s natural defenses can spiral out of control.

Parker and Bilbo decided to see if restoring the internal ecosystem in the gut could bring the brain’s immune cells back in balance.

Laboratory rats are ideal for testing the idea, Parker said, because the life of a lab rat is a remarkably clean one.

Scientists started breeding strains of rodents for laboratory experiments about 150 years ago. These animals are housed exclusively indoors, where their cages and bedding are regularly disinfected. A series of pumps and fans change the cage air more than a dozen times an hour. They eat processed food and sip treated water, and take deworming drugs and antibiotics to keep them free of parasites and pathogens.

“In a real sense we’ve done the same things to our lab animals that we’ve inadvertently done to ourselves,” Parker said.

The researchers did a first set of experiments comparing worm-free lab rats with rats that were raised on a farm where they were exposed to worms. When they infected the rats with bacteria, they found that the farm-raised rats avoided the damaging overproduction of cytokine proteins linked to cognitive decline later in life.

“We didn’t see the same hyper immune response in the brain,” Bilbo said.

Next, the researchers studied two groups of rats in the lab. One group consisted of typical lab rats whose guts were worm-free. The other group was identical in diet, housing, exercise and genetics to the first, except they — and their parents before them — were deliberately given tapeworms.

Both groups were injected with E. coli bacteria when the rats were newborns. Once the pups reached adulthood they were given a second injection, this time with a chemical from the cell walls of bacteria known to spring the immune system into action.

The researchers then monitored changes in the rats’ brains and behavior to see how they responded to the one-two punch.

The worm-free rats responded to the second immune challenge with the same harmful outpouring of inflammatory cytokines seen in previous studies.

But the wormy rats, and also rats that were worm-free but born to worm-infested parents, responded differently.

Notably, the immune cells in their brains were able to respond to the second trigger without going into overdrive. They also didn’t develop the same memory problems later in life that their worm-free counterparts did.

Next, the researchers hope to figure out whether before or sometime after birth is the optimal time for treatment.

“Pregnancy is such an interesting time for the immune system,” Bilbo said. “Maybe that’s why it worked so well. We just don’t know yet.”

A new microscope capable of capturing nearly 17 billion pixels in a single image has been developed by Antony Orth PhD ’14, now of RMIT University in Melbourne, Australia, andEthan Schonbrun of Harvard’s Rowland Institute. The microscope speeds up cellular imaging, making it easier to observe how cells respond to drug treatments. The research was published in the journal Optica.

The microscope uses thousands of microlenses — each about the width of a human hair — and a dispersive prism to capture thousands of images and spectra simultaneously.  The individual images are stitched together into one large mosaic, enabling the visualization of more than 13 resolvable colors in an extraordinarily large number of cells.

To zoom in, view the image on GigaPan.