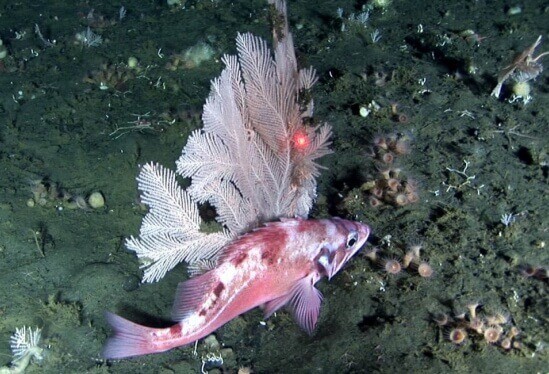 North of the Aleutian Islands, submarine canyons in the cold waters of the eastern Bering Sea contain a highly productive “green belt” that is home to deep-water corals as well as a plethora of fish and marine mammals.

Situated along the continental slope, the area also supports a thriving — but potentially environmentally damaging — bottom-trawling fishing industry that uses large weighted nets dragged across the seafloor to scoop up everything in their path.

A new study, conducted by research biologist Robert Miller of UC Santa Barbara’s Marine Science Institute and colleagues from Greenpeace, combines a variety of data to identify coral and sponge habitats that may be threatened by bottom-trawling. Further, the investigators also used the results of their habitat models to evaluate how restrictions on bottom-contact fishing in Bering Sea canyons could impact the fishing industry. The results appear in the journal Global Ecology and Conservation.

“There’s a growing awareness of deep-water corals and their importance as fish habitat as well as their vulnerability to bottom trawling,” said lead author Miller. “They take a long time — tens to hundreds of years — to recover from being destroyed by bottom trawlers, particularly the big specimens, which can be really old.”

The research model incorporated data from bycatch records, National Oceanic and Atmospheric Administration (NOAA) surveys and Greenpeace-led submersible expeditions as well as physical oceanographic data such as temperature, bottom slope and current speed to identify the best locations for coral and sponge habitat in the Bering Sea. They found that Pribilof Canyon — an area larger than the Grand Canyon — contains the area’s densest populations of deep-sea corals and sponges.

One of five major canyons carved into the Bering Sea slope, Pribilof contains more than 50 percent of the estimated high-quality deep-sea coral habitat and 45 percent of sponge habitat, despite making up less than 2 percent of the entire area covered by the study. The amount of quality coral and sponges varied in the other canyons, but overall they contained more than other parts of the continental slope.

“In this study, we found Pribilof Canyon to be a hotspot for coral habitat in the Bering Sea,” Miller said. “In a previous study, we showed that these corals seem to be important fish habitat. So if conserving essential fish habitat and corals is important to ocean managers, Pribilof Canyon would be a good area on which to focus their efforts. Equally important, our analysis also demonstrates that Pribilof Canyon could be conserved without disproportionately impacting the commercial fishing industry.”