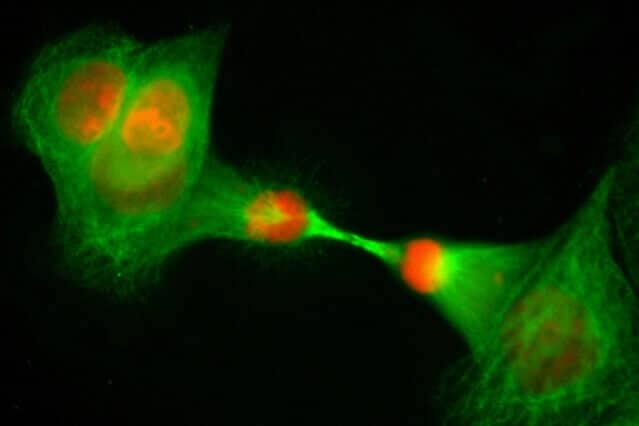 Mitochondria are well known for their role as powerhouses in our cells, using respiration to release the energy in the food we eat and trapping that energy in the molecule adenosine triphosphate, or ATP.

In two companion papers published this week in Cell, MIT researchers reveal why proliferating cells — including those in tumors — require mitochondrial respiration. While there are other ways to make ATP, cells can’t proliferate without access to electron acceptors provided by respiration.

For proliferating cells, there must be plenty of aspartate present to create all of the new cell’s RNA and DNA, as well as its proteins. Aspartate is an amino acid, one of the fundamental building blocks of proteins, but unlike the others it is not readily available in the bloodstream — indeed, it seems the body may actively limit blood levels of the amino acid — so each mammalian cell has to make its own. Furthermore, to make aspartate and nucleic acids, cells need to have a place to put extra electrons, because the end product has fewer electrons than the food cells ingest.

“This is a problem that all proliferating cells must solve,” says Matthew Vander Heiden, the Eisen and Chang Career Development Associate Professor of Biology, and a member of MIT’s Koch Institute for Integrative Cancer Research. “It is a problem in metabolism I had not considered before, but there are people in the bacterial world who have spent lots of time on it.”

Vander Heiden and his colleagues have been investigating the ways in which mammalian cells solve this problem, to get those excess electrons out of the way.

They used cancer cells whose mitochondria — organelles that have their own DNA — were genetically modified to disable respiration. With no intervention, these cells fail to proliferate, and their population gradually declines as some of the cells die off. Add some aspartate, however, and their population grows exponentially, showing that the cells were not able to create their own aspartate without respiration.

The researchers then took the experiment a step further to discover the exact role respiration was playing in the production of aspartate. If certain nutrients, such as pyruvate, that can act as electron acceptors are added to the disabled cells, they are able to proliferate just as well, even without aspartate. This suggests that the cells are able to make aspartate using the added pyruvate as a place to put extra electrons when oxygen is not available. This finding is important for cancer research, because it’s a loophole cancer cells can use to get around any attack on their respiration.

“That’s the name of the game for tumors. They’ve got to grow bigger,” says Celeste Simon, a professor of cell and developmental biology at the University of Pennsylvania, who was not involved in the research. “We didn’t appreciate that aspartate was so important. The assumption was that it was about generating metabolic building blocks.”

Simon and her colleagues work on metabolic problems in renal cancer. “What Matt’s paper tells us is that cells with defects in their electron transfer chains become dependent on pyruvate, which serves as an alternative electron acceptor for generating aspartate,” she says.

Since tumors have limited access to nutrients and oxygen, they likely generate aspartate in a different way. Knowing that cancer may be dependent on pyruvate to serve as an alternative electron acceptor, as one way to get around checks on its growth, means that researchers can look at ways to close that loophole.

Writing in the same issue of Cell, David Sabatini, a professor of biology at MIT and member of the Whitehead Institute and the Koch Institute, reports on his use of a different approach to determine the link between aspartate and cell respiration. Sabatini and his colleagues conducted a genetic screen using the genome-editing tool CRISPR, which revealed that without the enzyme GOT1, cells will die when respiration is inhibited. Under normal circumstances, GOT1 consumes aspartate to transfer electrons into the mitochondria.

Upon further study, the researchers found that when respiration is disabled, GOT1 will attempt to compensate for the lack of mitochondrial aspartate synthesis by catalyzing the reverse reaction, generating — instead of consuming — aspartate in the cytosol, or intracellular fluid. The researchers confirmed that pyruvate will promote this aspartate synthesis, rescuing cell proliferation by creating a place to put extra electrons.

“Our work reveals that the main role of respiration in cell proliferation is not energy production, but rather making this simple amino acid, aspartate,” says Kivanc Birsoy, a postdoc in Sabatini’s lab. “This result was quite surprising for us.”

It’s not just cancer research that might benefit from this key insight. For people who suffer from mitochondrial diseases, their conditions — many of them rare — often involve problems in cell respiration.

“These are usually viewed in terms of ATP, but some of them might also have to do with electron acceptors,” Vander Heiden says. He also notes that in diseases of aging, mitochondria often seem to malfunction, and some of these defects could result from an electron imbalance.

Even the fully functional control cells seemed to benefit slightly from improved access to electron acceptors and aspartate — a possible lead for future research on aspartate as a bottleneck in normal cell proliferation.

Beyond its near-future medical research applications, the discovery is considered an important advance in basic cell biology.