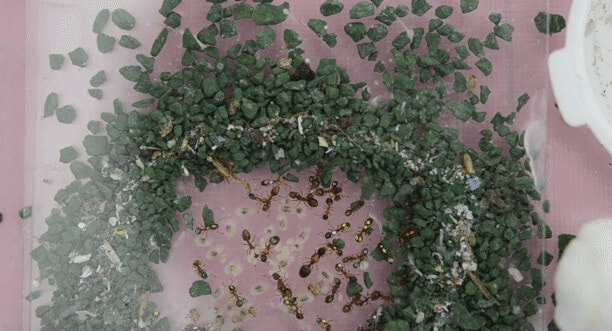 Next time you find yourself spending an entire day glued to the couch, don’t feel too guilty. It turns out that humans aren’t the only species with notoriously lazy members, and it’s possible that inactivity may even have evolved as an adaptive behavior.

This summer, University of Arizona entomologists Anna Dornhaus, an associate professor in the Department of Ecology & Evolutionary Biology, and Daniel Charbonneau found that some individuals in the ant species Temnothorax rugatulus spend the majority of their time in a consistent state of inactivity. The results were published in the journal Behavioral Ecology and Sociobiology.

“Interestingly, we found laziness to be a behavior in itself,” said Charbonneau, a graduate student in Entomology and Insect Science.

Charbonneau and Dornhaus tracked the behavior of 250 ants in five different colonies over three weeks, finding that almost half of them were consistently inactive. When the team realized that the ants’ inactivity was not because of differences in circadian rhythms or ant workers taking breaks, they concluded that laziness was a “specialization” for some ants, just like being a forager or a nest builder. However, the reason for their laziness remained elusive.

Now Charbonneau and Dornhaus are offering up some possible explanations in a new conceptual paper, and their ideas have implications for everything from human organizations to high-level computing. The paper was published online in the journal Bioeconomics.

“There are a lot of theoretical models to explain why workers perform the tasks they do, and we wanted to explore how different tasks get allocated to create an organized system that makes sense,” Charbonneau said. “We also wanted to demonstrate that inactivity can happen, and that it’s not necessarily a bad thing.”

To understand why a colony ends up with lazy ants, Charbonneau first looked into two characteristics necessary for the colony to successfully organize: flexibility and robustness. Flexibility describes a colony’s ability to respond quickly to change in demand, such as a sudden need for more food, and robustness is the colony’s ability to adapt to worker loss. As a result of these properties, there are natural fluctuations in the need for workers throughout the colony, and Charbonneau thinks there may be a lag time between ants seeking and finding work to do.

“The inactive ants could be reserve workers,” Charbonneau said. “It makes sense to have reserves to meet the peak of those fluctuations — it’s better to have too many workers during the down times than not enough during the peaks.”

Another possible explanation is called the response-threshold model. Some individual ants have lower or higher or thresholds at which they will start doing work than other ants. It could be that these different thresholds result in worker ants’ specializations, and that lazy ants have the highest thresholds of all.

“An example from the human world is a roommate that has a high threshold for washing dirty dishes, while you have a low one,” Charbonneau said. “The dishes will start to pile up, and you’ll end up being the one that does them.”

Although some ants are just lazy, it may not be for lack of trying to find work. Charbonneau thinks inactivity also could be related to the size of the colony.

“In smaller colonies, workers tend to be more generalist because the probability of any worker encountering any given task is much higher,” Charbonneau said. “As colonies get bigger, workers tend to stick to certain spots, and there might be a certain set of tasks available there. An ant that wants to work might not have anything to do in that particular spot, resulting in inactivity.”

Of course, a lazy ant also might be performing tasks that are invisible to the human observer. Charbonneau explored the idea that they could be functioning as information relays, directing other workers toward tasks while appearing inactive. To test this, Charbonneau looked at the frequency of interactions between lazy ants and other workers.

“It turns out they’re actually the least connected to all of the other workers, so information relay is probably not what’s happening,” Charbonneau said. “They could be avoiding work, or just be unaware that work needs to be done.”

More promising is the idea that inactive ants are living refrigerators. In some species of ants, there are specialized workers that gather and store food in specialized stomachs called crops. These workers bring their spoils back to the colony and regurgitate it to feed it to other ants in a process called trophallaxis.

It’s possible that lazy members of T. rugatulus could be taking on a similar role. Charbonneau is investigating the nutritional content of the guts of lazy ants to determine if this might be the case.

Finally, Charbonneau is looking into the possibility that lazy ants are breeding new workers for the colony. In the results of an unpublished study, Charbonneau found that the ovaries of lazy ants are more developed, indicating that they are more likely to have viable offspring.

“We don’t yet know if these ants actually lay their eggs, and whether they would hatch and reach maturity,” Charbonneau said. “Some ant species will lay eggs that can be used as food for the colony, so that could also be happening in this case.”

For all of the ways we might try to rationalize laziness, Charbonneau has a hunch that it’s simply an emergent property of all types of complex organizations, whether natural or man-made.

“In cloud computing, where you have a network of servers working together to store or analyze data, you end up with some servers that are completely inactive,” he said.

Charbonneau and Dornhaus are collaborating with computer scientists and roboticists to explore how their findings on complex organizations may inform the development of more efficient computing systems.

“In any decentralized system with individuals working together, you’re going to end up with some inactive individuals,” Charbonneau said. “The question remains: Why?”