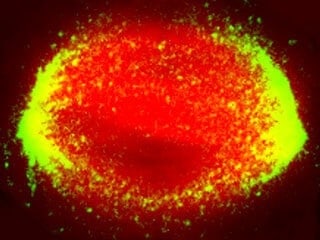 Many millions of times per day, football-shaped structures called mitotic spindles form within the body’s cells as they prepare to divide. The process is routine but mysterious, as the micro-mechanics involved are not yet well understood. In research published October 1 in Developmental Cell, scientists at The Rockefeller University reveal new insights into the mechanical forces that govern elements of the mitotic spindle formation.

“We know most of the proteins involved and have a pretty good handle on the biology and genetics,” says co-first author Scott Forth, a postdoc in the Laboratory of Chemistry and Cell Biology, led by Tarun Kapoor, who is the Pels Family Professor. “But we don’t yet know much about the mechanical side of things, and cell division is a very mechanical process.”

The researchers described how a protein called kinesin-5 acts like a kind of molecular motor to help organize the mitotic spindle. Ultimately, their work could have medical implications, since a better understanding of cell division could lead to new cancer therapies to hinder tumor cells’ reproduction.

In order to segregate chromosomes into the two emerging cells, the spindle itself needs a bipolar structure, and so the microtubules must be sorted to align with the long pole-to-pole axis of the spindle. This job is accomplished by kinesin-5, which can bind to two overlapping microtubules, linking them like a bar in the letter H, and directing them to the appropriate locations.

For this study, the researchers took a detailed look at the physical forces generated by the motor protein as it helps organize the mitotic spindle.

To do the sorting, kinesin-5 can link two anti-parallel microtubules, pushing them in opposite directions, so their minus ends move away from the spindle’s center and toward the spindle’s poles. The force exerted by kinesin-5 in that process hasn’t been previously measured.

By shining a laser light on a microscopic-sized plastic bead attached to a pair of microtubules linked by kinesin-5 molecules, the team tracked their activity and discovered that this force is a function of the microtubule overlap—the longer the overlap, the greater the force. “This is a way by which the cell can tune the amount of force it needs in order to build a nice balanced spindle structure,” Forth says.

Kinesin-5 can also link parallel microtubules, and the researchers found that in this case, it behaves differently. Rather than producing a pushing force, it generates a resisting force that can slow down the microtubules’ motion. And here again, that force scales up with the length of overlap between the microtubules.

“We believe that kinesin-5 has the ability to coordinate the speed of microtubules and keep them from going too fast or too slow,” says Forth, likening the protein to a gear box in the car. “It helps coordinate and govern the speed and location of the microtubules in the spindle.” As many kinesin-5 molecules work together directing microtubules, they become the governing force of the spindle formation.

“This work represents an important advance in our efforts to build, from the ground up, the dynamic spindle apparatus out of purified proteins,” says Kapoor, the senior author. “It also helps reveal how nanometer-sized proteins work together to assemble complex cellular structures that are thousands of times larger than themselves.”