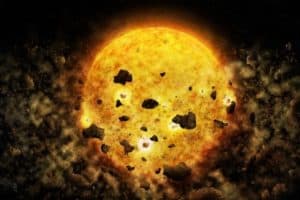 A collaborative team of scientists led by researchers at The Medical College of Wisconsin, in Milwaukee, has used the tools of structural biology to understand how a synthetic chemical mimics abscisic acid (ABA), a key stress hormone that helps plan…

Scientists racing the clock have snapped a photo of a gamma-ray burst event one minute after the explosion, capturing for the first time a particularly fast-fading type of “dark” burst, which comprises about half of all gamma-ray bursts. A gamma-ray burst announces the birth of a new black hole; it is the most powerful type of explosion known, second only to the Big Bang in total energy release. This latest finding may double the number of gamma-ray bursts available for study and rattle a few theories as well, said scientists from the Massachusetts Institute of Technology, based on an X-ray image taken by the MIT-built High Energy Transient Explorer (HETE) satellite, the first satellite dedicated to spotting gamma-ray bursts.