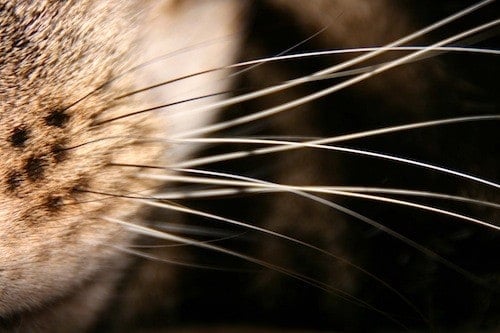 As our sensory organs register objects and structures in the outside world, they are continually engaged in two-way communication with the brain.

In research recently published in Nature Neuroscience, Weizmann Institute scientists found that for rats, which use their whiskers to feel out their surroundings at night, clumps of nerve endings called mechanoreceptors located at the base of each whisker act as tiny calculators. These receptors continuously compute the way the whisker’s base rotates in its socket, expressing it as a fraction of the entire projected rotation of the whisker, so that the brain is continually updated on the way that the whisker’s rotation is being followed through.

Whiskers, like our eyes or fingers, must move to sense the stationary things in their environment. Prof. Ehud Ahissar and his group in the Institute’s Neurobiology Department, including Dr. Knarik Bagdasarian, have been investigating the rat’s active sensing system for over a decade, applying a method in which the experimenter “does the whisking” for an anesthetized rat. This method enables them to study so-called active sensation, but the whisker’s movement could not mimic that of awake rats – in which sensing and the act of whisking are tightly bound.

In the present study they combined their method with one developed by Dr. Avner Wallach, at that time a postdoctoral fellow in Ahissar’s lab, whose PhD research with Profs. Shimon Marom and Ron Meir in the Technion had involved work on integrating computers into biological systems. Wallach, Bagdasarian and Ahissar further developed a combined method: a closed-loop system in which the rat whisking system and the computer form a sort of “rat-computer hybrid” that recreates the whisking movement and the way it is regulated in awake, freely-moving rats.

The discovery that the mechanoreceptors within the whisker follicle were actually calculating the whisker’s motion phase “online” came as a surprise to the researchers, because knowing the phase implies predictive knowledge of how the whisker motion will develop. The assumption was that specialized neuronal circuits would perform this calculation using raw data from both the receptor and the brain’s motion-planning circuits.

“On second thought,” says Ahissar, “this work division is sensible. The sensory organs are not merely ‘signal converters.’ Rather, they are broad, inclusive interfaces between organisms and their environments, providing everything the brain needs for making sense out of their signals.” Next, the researchers would like to know how the sensory organ physically calculates this predictive information.

The combined method might, in future research, be used to explore other closed-loop algorithms in the brain. “By investigating sensing with a machine-brain interface, we were able to obtain a sort of insider’s insight into the communications between the whisker and brain,” says Wallach. “This ‘inside agent’ can be moved around to explore other complex motor-sensory loops underlying perception.”

“The more the sensory organs are studied, the more their complexity and sophistication are revealed,” adds Ahissar. “It seems that their evolution is a key factor in the evolution of perception.”