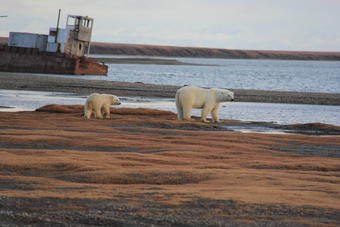 In an updated study evaluating threats to the long-term persistence of polar bears, scientists found that aggressive greenhouse gas mitigation could greatly reduce the chance of a substantial decline in the worldwide polar bear population.

The polar bear, a species listed as threatened because of Arctic sea ice loss, depends on the ice over the biologically productive continental shelves of the Arctic Ocean as a platform for hunting seals.

Declining sea ice conditions, affected by rising global temperatures, are the most influential factors in determining the future of the polar bear population. In the new study, models show that if atmospheric greenhouse gas concentrations continue to rise at current rates, polar bear population sizes will greatly decrease by the end of this century.

This U.S. Geological Survey-led research found that stabilization of atmospheric greenhouse gas concentrations by midcentury could delay population reductions by approximately 25 years in two of the four ecoregions where polar bears are found. Additionally, prompt and aggressive mitigation that keeps the Earth from warming more than 2 degrees Celsius above preindustrial levels has the potential to reduce the probability of any regional polar bear population becoming greatly reduced by up to 25 percent. The research showed that minimizing other population stressors such as hunting, trans-Arctic shipping, oil and gas exploration and exposure to contaminants had comparatively minor effects on polar bear outcomes in the long term.

“The scenarios predicted by our models are encouraging in that there are clear actions that humans can take to improve the chances that healthy polar bear populations persist in the future,” said Todd Atwood, research biologist with the USGS. “The research can help management officials and political leaders make decisions based on the best available science.”

In 2013, the USFWS convened the Polar Bear Recovery Team to draft a recovery plan for polar bears. To inform that effort, the USGS developed a model that included projections of future sea ice conditions to evaluate the influence of different threats to polar bear population persistence and thus provide a framework for recovery planning. Results of that modeling effort were published in 2015 to coincide with the accelerated timeline for developing the polar bear recovery greenhouse gas emission trajectories.